A reprimand for di Resta 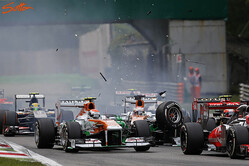 Paul di Resta has been handed a reprimand for the incident on the opening lap which saw him eliminated from today's Italian Grand Prix.

The Scot, who crashed out of the Belgian Grand prix after being hit by Pastor Maldonado, ran into the back of Romain Grosjean as the two battled with Adrian Sutil at the start of today's race. Barely seconds after the incident he admitted his mistake to his team over the radio.

"I just got caught out going into the second chicane because the cars ahead of me got backed up," he said later. "I guess they were reacting to the tussle going on ahead of them. I locked both fronts trying to stop the car and ended up hitting Grosjean. Unfortunately it was too late to take avoiding action. Now we need to look forward to Singapore and put this one behind us."

As far as the stewards were concerned, di Resta made an attempt to avoid the collision when he saw the cars in front braking earlier by trying to drive between them, but in doing so collided with Grosjean.

Deeming that he had been involved in an incident as defined by Article 16.1 of the FIA Formula One Sporting Regulations they handed the Scot a reprimand.