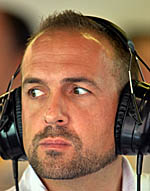 Sauber chief designer Matt Morris is to join McLaren in a move which appears to have caught the paddock, and the Swiss team off guard.

Both teams are struggling this year, and while some say the Woking outfit is hurting from the loss of Paddy Lowe to Mercedes, Morris, who was largely rersponsible for the Hinwil outfit's 2012 contender is thought to be a good move for the multi-champions.

"Matt will join McLaren Racing as engineering director once his current contractual situation with Sauber is resolved," a spokesperson told Pitpass. "Matt will work for our technical director, Tim Goss, to ensure our engineering standards and technical decision-making capabilities are of the highest quality.

"During a period of intense technical challenge within Formula 1, Matt’s appointment is the first step in an on-going programme to strengthen the engineering department as our organisation prepares for the arrival of Honda in 2015."