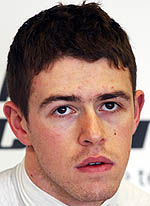 A combination of German's continued dominance and the lack of a British challenge appears to be hitting British Grand Prix ticket sales.

With multi-champions McLaren sixth in the championship, Williams yet to score a point and headlines like "Hamilton says he has no chance of winning British Grand Prix" and "Button writes off McLaren's season and British GP hopes", it's understandable that British fans are not anticipating a 'home' win this season.

Other than Hamilton, who is looking increasingly despondent the other main British hope would appear to be Paul di Resta. However, despite a strong performance in Canada which appeared to belie the tyre wear myth, there is increasing concern at the Scot's relationship with his team.

At a time the Force India driver refers to his team as "they" rather than 'we', a British tabloid claims there was even a bit of 'aggro' in the team garage following Saturday's qualifying session.

Meanwhile, reminiscent of the Schumacher era, Vettel seems to be cruising towards his fourth title, his only opposition coming from Fernando Alonso.

All this, combined with one of the coolest, most miserable Junes in recorded history, appears to be having an effect on ticket sales for the forthcoming Grand Prix at Silverstone, the eighth round of the season.

Last week, a number of teams, including McLaren, Williams and Marussia were reminding fans that tickets for the event are still available.

Under 'normal' circumstances they would have sold out months ago.