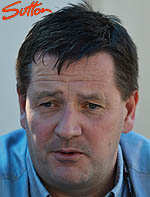 Pirelli's Paul Hembery claims that following the trial of its latest tyres this weekend, there will be no further upgrades in 2013.

The Italian manufacturer, seemingly always in the headlines these days, will be running a new medium compound during the Friday practice sessions in Montreal ahead of its race introduction three weeks later at Silverstone.

As a result of the spate of delaminations this season, the manufacturer is also reverting to the Kevlar belt pack (as opposed to metallic) used in 2011 and 2012.

However, with a new contract for 2014 and beyond still to be signed, Hembery insists that there will be no further upgrades this season.

"Ideally we'd like to change the harder compound to give us more guarantees of being under three stops," said Hembery, according to the Guardian. "But that sort of change needs the agreement of all 11 teams. Teams have taken different design approaches, so some feel they don't wish to be penalised by an in-season change that may alter their performance levels.

"So every team has the same opportunity, and in the end the best car and driver will win the championship."

Referring to the delaminations and the subsequent change to the tyres, he said: "We have seen a small number of tyres this year with the tread that has come away. We've used more than 12,000 tyres this year, and we've seen 14 where we've had images of the tyre getting a cut which goes through to the belt and it creates overheating.

"We've been working on our inner-drum testing and creating that type of defect by basically putting cuts in tyres," he revealed. "That enabled us to come up with a solution which in reality is very close to what we have been using in the past. In a sense the belt pack is the 2011-12 one used by all teams up until last year. We're confident it provides a solution to delamination."

The 'revised' tyre was used during the infamous Barcelona test by Mercedes however, Hembery insists the German manufacturer will not have an advantage.

"We just wanted to perform a check on a race circuit we knew to make sure there were no balance issues," he said. "Even that tyre had a different compound to what we are going to be using this year. On Friday it will be the first time, in the full specification, any team has tested them."