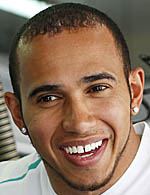 Lewis Hamilton admits to yearning for the days of Ayrton Senna and Gilles Villeneuve, when Formula One was closer to the edge, literally.

Days after the nineteenth anniversary of his hero, Ayrton Senna's death, and the day before the thirty-first anniversary of Gilles Villeneuve's, Lewis Hamilton has admitted a certain nostalgia for those 'distant' days - when the cars were more hands-on, the circuits that more dangerous and the drivers closer to the edge… often with fatal consequences.

"I drove one of Ayrton Senna's cars, the 1989, for a few laps around the national circuit at Silverstone once," he told the Daily Mail. "It was one of the best experiences I've ever had.

"Senna, Gilles Villeneuve - they were very similar," he continued. "That's what I wanted to adopt, I wanted to be like them, and I think I drive now in the way I imagine Senna would drive. That's the only way I know. They were the best, what they did was the best, and I want to master it as well."

As F1 gradually moves out of its traditional European heartland and into the east, where Hermann Tilke's creations are more style over substance, Hamilton laments the old fashioned circuits and the racing they created.

"If you watch Sebastian Vettel now, he always runs over the astroturf and over the kerb a little more than he should," he says, "going beyond the white line, which you're not actually allowed to do but they let you get away with it. In Senna's day, if he went one foot over that kerb, it would be grass and he would spin, and be penalised. He would be right on the limit, rather than over the limit - and I respect that style of driving more.

"Now you can go beyond and get back because modern tracks have run-off areas. They used to be gravel. Hit that, and your car was damaged or stuck. Now you can push beyond, go wide and come back on.

"When you do and get away with it, you think, 'Great', but the reason I love street circuits like Monaco is there is no room for error and if you make a mistake, you pay. I don't want people to pay by being hurt, but losing time, or having the car stop; that's what racing is about.

"That's why you've got to have so much admiration for the guys who did it back then. I like that it's safer now but the cars then were raw - they had a gear stick. You watch Senna at Monaco and he's one-handed most of the time, over-steering. That's really cool. So cool.

"I think that would have brought a lot more out of me, the time before the driver aids came in. Now it's so technical, sitting around talking about hydraulic dip. I have tons of buttons - 26 on a Mercedes steering wheel - and to understand and utilise them all is a science in itself.

"If I could choose an era, I would love to have driven in Senna's time, 1988, 1989. The cars were dangerous then. When I went around Silverstone in his car, I went flat-out and my head felt so exposed. I thought to myself, 'Jeez... those guys'," he admits.

"I've driven the Mercedes W125 from the 1930s, too - no seatbelt, you turn too quickly and you just roll out of the thing. The challenge now is different. It's more of a technical challenge.

"Formula One changes every year. I have to dissect every piece of information about tyres, about downforce, about fuel-saving, and then still take on the other drivers. After Monaco, you get a big headache, because your eyes are moving all the time and you're so focused. Ayrton described Monaco as an out-of-body experience by the end, when you get in that zone. It can take a couple of hours to come down after the race, with the dehydration, too. My knees kill me after races. That's the pressure you put through the brake and the throttle.

"You hear some drivers who become more cautious with age, maybe they have kids and they lose the will to put the car on the edge. But I'm not the type to do that. I won't be more cautious for anything, that's not the way I'm built. It's got to be dangerous for me. If you take away the danger from Formula One, I wouldn't do it any more. But it's still dangerous enough. When I'm driving a qualifying lap right on the edge, it's dangerous all right."

Asked about his controversial move to Mercedes, a move which, contrary to widespread media speculation, appears to be paying off, he revealed part of the thought process that went behind his shock decision.

"I stayed up a lot thinking about the move," he admits. "I can over think things at times. I did consider what my dad would feel, but I tried not to involve too many people because the call had to come from me. I went to Thailand on my own and made that decision on my own. I had two options, but as someone who likes adrenaline and excitement, one was riskier than the other. So I went with that one.