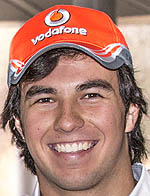 Sergio Perez: "That was an incredible race - really enjoyable. I have to thank the Vodafone McLaren Mercedes team first of all - we've been through some difficult times recently, but they kept on supporting me. All in all, it's been a solid weekend - we got pretty much the maximum from the car, ran a great strategy, looked after the tyres, and scored some very useful points.

"I guess I was a little aggressive on track today; banging wheels with Jenson was perhaps a little too risky, a little too hard, but the team never came on the radio to tell us to stop racing. There were no team orders.

"There was a lot of adrenaline from both of us, and Jenson is always a very strong racer, but hopefully we'll help each other a little more in the future.

"He was calm and friendly after the race, though, which was great; but that isn't surprising because he's a great guy as well as a great driver."

Jenson Button: "Today wasn't brilliant for me. Okay, the race was a lot of fun, but I didn't get the result I wanted because I used up my tyres fending off Checo.

"There was a lot of action out there, and as I say I wasn't really able to conserve my tyres as a result. That was partly because I had to work my way back through after my second pitstop, when I'd been fighting with Romain [Grosjean].

"But there was a lot of clean racing out there too - although as I say Checo was a bit tough, which was a little unusual. He did a good job overall though: he had good pace, and he looked after his tyres well. So, congratulations to him, because together we scored some very useful points for the Vodafone McLaren Mercedes team today."

Martin Whitmarsh, Team Principal: "The 2013 Gulf Air Bahrain Grand Prix was a fantastic motor race, and I'm sure it was hugely entertaining for the tens of millions of viewers who watched it at home as well as for those lucky enough to be here at Sakhir to see it for real.

"Checo drove his best race for Vodafone McLaren Mercedes so far, passing both Fernando [Alonso] and Mark [Webber] in the closing stages, to finish a fighting sixth at the flag.

"It was a very good drive, especially when you consider that he was able to maintain such strong race pace despite having sustained damage to his rear wing and one of his front-wing endplates.

"Jenson would have finished right up there, too, had he not had to make an extra tyre stop with just 10 laps to go. Nonetheless, he, too, finished in a solid points-scoring position.

"The two of them spent much of the afternoon in close proximity to each other - sometimes in nail-bitingly close proximity actually - but that's motor racing. Both Jenson and Checo are fast, forceful and hungry for success - and that's exactly how it should be. It's called racing, and we at Vodafone McLaren Mercedes always allow our drivers to race. It's what this sport is all about. Having said that, it's probably fair to say that Checo was a little too combative with Jenson this afternoon, and I think he knows that.

"From here we travel back to Woking [Surrey, UK], where we'll work hard on our upgrade package for Spain, where in three weeks' time we hope to continue the process of demonstrating the fruits of our steady development of MP4-28 into the competitive machine we need it to be."