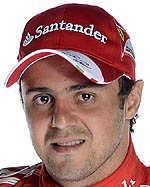 Tyre options this weekend are hard (prime) and medium (option), Pirelli having reversed its original decision to use hard and soft.

The two DRS zones are on the main pit straight and on the back straight between T10 and T11.

There are two reserve/test drivers in action this morning. As previously reported, Heikki Kovalainen replaces Giedo Van der Garde at Caterham, while Rodolfo Gonzalez replaces Bianchi in the Marussia.

After his problems in the last couple of races, Romain Grosjean has a new chassis this weekend.

The lights go green and Gutierrez leads the way followed by Chilton, Perez, his car wearing an interesting laser (measuring) device at the rear, being another early riser.

As more and more drivers pour on to the track mechanics are still working on Alonso's car, applying lashings of flo-vis. At the back of the garage the Spaniard looks totally relaxed.

As Alonso finally heads down the pitlane, eight minutes into the session all but the Mercedes duo have been out.

Seventeen minutes into the session, with the Mercedes duo still to appear, Perez comes out again. The Mexican is under increasing pressure to raise his game, having suffered a particularly bad weekend in China.

Hulkenberg heads down the pitlane followed by Hamilton and, eventually, Rosberg.

Hulkenberg gets things underway, the Sauber driver crossing the line at 1:42.500. Elsewhere, Rosberg, complains of something "strange" in terms of his car's handling as he heads back to the pits.

Hulkenberg improves to 40.521 as the Mercedes mechanics get to work on Rosberg's car.

As Gutierrez raises the bar with a 38.556, Raikkonen goes quickest in the first two sectors, finally crossing the line at 35.533.

The Mexican faces a five place grid penalty on Sunday, while Webber loses three places. Both are penalised for misdemeanours in China, Gutierrez having clashed with Sutil and Webber with Vergne.

Next time around Button improves to 35.305as Sutil goes third with a 35.405. The German, and his Scottish teammate, the subject of much media nonsense this week as journos, tiring of the Red Bull shenanigans, look for other victims.

Sutil improves with 35.119 to go quickest as Bottas goes fifth ahead of Maldonado, Gutierrez, Kovalainen, Chilton and Gonzalez.

Kovalainen and Pic are both on track as Caterham appears to be comparing the two drivers form. The Frenchman posts 37.908 while the Finn posts 38.578.

On his first flying lap, Vettel goes straight to the top of the timesheets, the German posting a 34.978.

As Webber, celebrating his 200th Grand Prix appearance this weekend, begins his first flying lap, Vettel goes quicker in the first two sectors before easing off in S3.

Next time around Webber goes second with a 35.101 while Rosberg goes eighth with a 35.834. Vettel runs wide at T15 as he lines up Vergne.

At half-time, it's: Vettel, Webber, Sutil, Button, Raikkonen, di Resta, Perez, Bottas, Hamilton and Rosberg. Still no time from Grosjean, Alonso and Massa, though the Frenchman and Spaniard are on track.

A slo-mo shot of Raikkonen running wide over the kerbs shows just how hard the Lotus is punished, a 'shock-wave' appearing to run the length of the entire car.