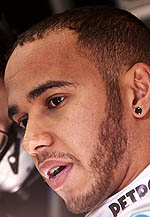 Mercedes was not Lewis Hamilton's first choice when fleeing the McLaren nest. Instead he had hoped to drive alongside Sebastian Vettel at Red Bull, however, team owner Dietrich Mateschitz left the decision to Mark Webber.

The revelation comes thanks to Bernie Ecclestone, who says once the Red Bull door closed he suggested Hamilton should instead speak with Mercedes.

"Dietrich is a very honest, straightforward guy and told Mark the door was open for him to stay," Ecclestone told the Daily Mail. "That was good of him."

Webber had been linked with Ferrari for much of the early part of last season. However two days after winning the British Grand Prix he was confirmed at Red Bull for another year.

"Had Mark gone, Dietrich would have signed Lewis," Ecclestone claims. "Sebastian wouldn't have cared if Lewis had signed for the team."

With the door at Milton Keynes closed Ecclestone then suggested Hamilton speak with Mercedes. "Lewis rolled his eyes … but I told him that he had nothing to lose as he wanted out of McLaren."

The 2008 world champion finally signed with the Brackley squad for a rumoured £60m salary over three years.