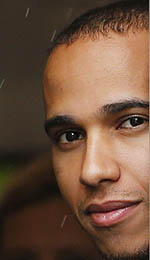 Mercedes may not feature highly during qualifying but both drivers are confident of their pace heading in to Sunday's Malaysian Grand Prix.

In tricky wet conditions in Australia Nico Rosberg showed the way during qualifying, though both he and teammate Lewis Hamilton struggled to match the pace of the leaders once it dried out.

However, after Friday practice in Malaysia both were in buoyant mood, happy with the performance of their cars in race trim, even if it meant they might struggle in qualifying.

"When we did the long run it felt pretty strong," Hamilton enthused. "I'll go and see whether or not someone else did a long run and compare it, but it felt quick. The car felt better than it was in the last race."

His comments were echoed by Rosberg, who admitted the hot conditions had taken it out of him. "I'm going to get on the scales now to see how much I've sweated, but for sure a couple of kilos," he said.

"We've been concentrating on our long run problems and our short run wasn't looking that great today."

Pirelli expects a three-stop race on Sunday, with the medium compound tyres expected to last little more than twenty laps. However with wear expected to be reasonably high those who can manage their tyres over a longer stint will be at a distinct advantage.

Hamilton had struggled with wear in the mornings session, though by the end of the day he was far more positive. "I don't think we're eating up the tyres too much," he said. "In the first we did chew up the tyres a bit but that was mostly due to the set up. It was a very oversteery setup, which wasn't too good.

"I think we're at least where we finished in the last race, but I think we can do better."