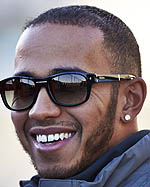 It was a happy Lewis Hamilton that faced the media after today's Australian Grand Prix, the Mercedes driver clearly encouraged by his fifth place.

"I'm really happy with where we've finished," he beamed. "Of course we would of loved to have finished higher but to finish where we are is a good baseline."

Hamilton started his first Grand Prix with his new team from the second row, though he dropped to fifth at the flag after struggling for pace early on.
"My first stint didn't have the pace," he conceded. "I went quite long on the first stint, so I was hoping to be on a two stop.

"But then I locked up defending for Fernando," he added. "I had to come in immediately and we had to switch it to a three stop. So I kind of lost out a little bit there but I don't know whether we had the pace really to keep up with the guys at the front."

The lack of early pace confused Hamilton, though once he'd swapped the super-soft tyres for mediums he was able to match the leader's times.

However, he readily accepts that fifth is a good result for the team, admitting it's a position he would have taken if offered ahead of the weekend.

"I definitely would," he laughed. "I'm sure if you go back and some of the guys will feel a little frustrated that we didn't finish where we started, or even further forward, but that's a good position. That's a good feeling to have because we came here not knowing what was going to happen.

"We just need to improve a couple areas on the car but I think we have a really good base to work from."