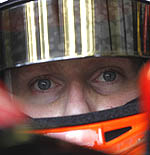 Lotus is lending its support to Kimi Raikkonen at the expense of Romain Grosjean, the team has admitted.

With limited testing the pressure is on teams to produce a steady stream of race-ready developments to bolt on to the cars for each race. These pressures often mean Lotus is only capable of producing one set of updates, which, according to the team's Technical Director James Allison, have so far gone to Raikkonen and not Grosjean.

"In Melbourne on Friday he was running a step behind Kimi in terms of his aero package," Allison confirmed. "He had the upgrade for Saturday morning but then Saturday was disturbed by the weather as we all know.

"Here, once again, we only have one set of kit and we've chosen to run that with Kimi, and Romain is disadvantaged for that."

While that goes some way to explain the difference in performance between the two, the Frenchman is not convinced his lack of pace is explained quite so easily. There is something more fundamentally wrong with his car he believes, though he is unable to identify exactly what.

"I think we still have funny things with the car that are the same as we had in Melbourne," he said on Saturday. "We don't understand it.

"The set-up changes when you are not expecting it to change," he added. "Suddenly it can bring you different things and it doesn't make the car easy to drive."

The Frenchman does not believe the issue is his chassis, nor does he think it's a result of not having the latest exhaust updates which Raikkonen has.

"We don't know what's going on," he confessed. "I know the team are going to work hard and if they can change a few pieces to make it consistent and reliable to what we think it is going to do then we will do it for tomorrow.

"I keep my fingers crossed to solve the issue, but at the moment there is not really an idea of what is causing it."