Lotus due look ahead to Sepang

After his success in Melbourne, and now the dust has settled, the Iceman talks us through just how good that win felt, and how he will prepare and look forward to trying to achieve the same in Malaysia.

What are your main memories of Sepang as a circuit?
Kimi Raikkonen: Malaysia has been good and bad for me in the past; I've had a few bad races there but I've also won three times at the circuit including my first Grand Prix victory so it's nice to go back to where it all began with my first win. For sure I will always remember that my first win came in Malaysian Grand Prix in 2003.

As it's the location of your first win, does that mean it's a special place for you?
KR: I would not say that circuit is more important for me - it's not that special for me - but it's quite a nice place to race at. I like it and the challenge is always at the highest level in the beginning of the year in the heat. It's also one of those circuits where it usually rains sometime during the weekend. So you have to plan the programme with that possibility, too.

Winning the first race of the season automatically means you're leading the Drivers' Championship; it must be a pretty good start to your year?
KR: It feels good but it's only after one race. It doesn't really change our aim and how we approach this year. Definitely, we are happy with the win but there is an awful lot to still to do to win the championship. We seemed to have a good car in Albert Park, so hopefully it works well in the next races also.

Is a win so early in the season more important?
KR: A win's a win, it doesn't really matter when in the season you get it. Of course I'm happy that we didn't really have to go full speed all the time so it's kind of a good sign, a good race for us, but as I said, it might be a completely different story in Malaysia, so there's nothing to jump up and be so extra happy about. It's a long season and in the end we want to be on the top for all the races and it's going to be a hard season for that. Everything worked well in Australia, we had no issues with the car all weekend, the car's been good and the team has been working well. It's good to come back from winter testing where I probably did the least laps of everybody, in that respect we didn't have a very special winter.

What are your thoughts looking ahead to Malaysia?
KR:It's a difference place, it's going to be much hotter there so it's very difficult to say how the cars will feel, who will be fastest after having done just one race. I think we have to do two or three races before we really know who is where and what's going to happen. It's probably going to rain again in Malaysia at some point but it will be a different circuit, different conditions. Our car worked well in Australia and usually - at least last year - in hot conditions it's been good for us so hopefully it will turn out to be a good weekend.

Do you think the team can maintain the initial momentum?
KR: There was a big question mark last year over whether our team could keep up with the development of the bigger teams and I don't think we did a bad job. Of course it's not going to be easy for us. I'm sure we have the people and all the tools to make it happen. Budget is always a factor and it's no secret that we don't have the same money as Ferrari, Red Bull or Mercedes. If we did have more sponsors I'm sure we'd have a better chance in the battle against those teams.

It's a long season. If you do things right it will go nicely but one thing can change the whole year. You do a few things a little bit wrong it can turn around and go downhill after that. So we just have to do our normal things, like we did last year and put the good effort into new parts and if we're happy we keep them and if not we have to look more closely. But like I said, so far it has been good, so there is no reason why we can't keep it up. 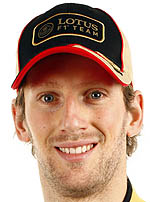 Romain Grosjean talks us through his plan of attack for Malaysia, and just why Sepang International is one of his favourite circuits of the Formula 1 season.

Sepang International is a circuit you like a lot, why?
Romain Grosjean: Sepang is probably my favourite track of the whole season. I first raced there in 2008 as part of the GP2 Asia Series and I really loved the circuit. It's nice and wide, with fast flowing corners and a lot of undulation which makes it great fun to drive. The last corner is a tricky one, but I enjoy everything about racing there. Well, maybe not the heat and humidity, but at the end of the day it's just another challenge for the drivers! I'm really looking forward to it.