Raikkonen leads the way in FP2 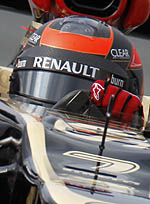 Some of the teams are predicting rain and while there is a storm, according to Twitter, over the Strait of Malacca, it is not thought to be heading this way. Then again, if is going to rain, this is the right time of day for it.

Mark Webber was quickest this morning, ahead of Raikkonen, Vettel and Alonso, however, with tyre wear proving to be as big a problem as expected it was clear, from the onboard footage, that the Lotus appears to be dealing with the situation better than its rivals.

McLaren and Williams are both worryingly off the pace, while Sutil and di Resta demonstrated that Melbourne was no flash in the pan for Force India.

Chilton waits patiently at the end of the pitlane for the lights to go green, he is joined by Pic, Vergne and a host of others as dark storm clouds appear from nowhere.

At which point the timing screens fail. Again.

No messing about with installation laps this time, everybody gets straight to work and while Vergne sets the early pace within moments Alonso has gone quickest with a 1:37.383.

With an eyes on the clouds almost everyone is on track and within moments Raikkonen (37.302) has eclipsed Alonso's time, Vettel goes third ahead of Massa and di Resta.

Sparks fly from the underside of Bottas' Williams through T12, the Grove outfit has its work cut out before Bahrain.

Gutierrez complains that after riding a particularly nasty kerb the fire extinguisher went off in his car.

Fifteen minutes into the session and the first drivers start switching to the option (medium) rubber, Vergne and Massa among the first.

Massa ups the ante with a 36.667, with teammate Alonso going second shortly after., both on the option rubber. Elsewhere, Gutierrez is back in the Sauber garage following his foamy problem.

As Button improves to eighth, di Resta has a massive lock-up and almost loses the Force India.

Both Lotus are running a new front wing as Vettel posts a 36.588 to go top.

As Pc has a big, big spin, Webber goes fourth. However, all eyes are on Grosjean who is on a hot lap, going quickest in S1. However, a poor S2 means he can only manage sixth.

As Hulkenberg runs wide at T14, fellow German Sutil clearly has a problem, he climbs from the Force India and the mechanics get to work.

Rosberg is on track on options, the Mercedes driver and his teammate currently propping up the timesheet.

As di Resta is told of rain at the far end of the circuit, Maldonado confirms it.

While Gutierrez appear to be sidelined with a broken exhaust, the removal of Sutil's floor suggests the German will also be taking an early bath.

Drivers now switching to longer runs, with an eye on Sunday's race. The failure of the timing system however makes it impossible to judge comparative pace.

Asked about his bottoming, Button advises that it's "much better".

Di Resta does well to control his car as he his a slippery patch. It's raining in the pitlane but nothing major. That said, it's clearly slippery.

"The rain is really bad now," says di Resta, "it's starting to get really slippy."