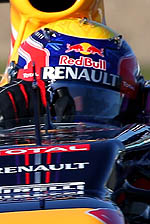 Ahead of today's opening session, the air temperature is 32 degrees C while the track temperature is 48 degrees. It is bright and sunny with humidity currently 57%.

Tyre options this weekend are hard (prime) and medium (option). With the track surface particularly abrasive here, we are expecting a lot of tyre wear.

All are on hard tyres but it is usual for drivers to stick with the primes in this session.

As ever, within a couple of minutes everyone has been out, everyone except Webber that it. Then, ten minutes in, the Australian heads down the pitlane.

While the drivers site around, each garage is a hive of activity with mechanics making numerous changes to the cars. Lots of new components being fitted, particularly at Williams which had a dreadful weekend down under.

Hulkenberg is first out for a second run, the German in a brand new chassis following his fuel cell problem in Melbourne which meant him missing the race.

Hulkenberg completes the one lap then returns to base, his place taken out on track by Bianchi who also completes a single lap.

Thirty five minutes into the session, as Red Bull is spotted dragging a new floor out of its cargo holder up to the garage, Chilton comes out to play. The British youngster posts the first time of the day, crossing the line at 42.513.

As the camera picks up Alonso watching in the Ferrari garage, nursing what looks like a comfort blanket, Perez heads down the pitlane in the McLaren. The Woking team coming off the back of a poor opening weekend in Melbourne.

As the McLaren and Marussia drivers improve, more drivers head down the pitlane, with 48 minutes remaining we're finally going to have some action.

A 38.113 sees Hamilton go straight to the top of the timesheets, watched by the legendary Niki Lauda.

Next time around a 37.075s sees Webber go quickest as Massa and Vettel head down the pitlane.

Worryingly, on his very first lap Vettel joins his teammate at the top of the timesheets, the German going second with a 37.354. Alonso is also on track now.

With Raikkonen and Sutil yet to show, Webber improves with a 36.935 as Rosberg goes third (37.588), ahead of Massa, Hamilton and Grosjean. Alonso's first flying lap sees the Spaniard go eleventh (39.074).

Sutil's first flying lap sees the German, who was mighty impressive last, go fourth (37.769) despite a big lock-up in T15.

Alonso improves to fourth with a 37.617 as Perez (currently eleventh) comes out for his second run.

With 30:10 on the clock, Melbourne winner Raikkonen finally heads down the pitlane.

A few slides here and there and even a few offs, Gutierrez spins at T14 and Alonso locks up and runs wide at T1. Elsewhere, Sutil has damaged his front wing but it is not clear how.