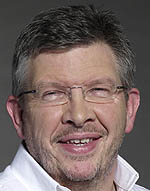 For the past couple of weeks Formula One insiders have been playing a guessing game: will Ross Brawn remain as team principal of Mercedes-Benz Grand Prix? The questions started in mid-January when Mercedes poached experienced motorsport manager Toto Wolff from Williams. His appointment followed Mercedes' hiring of Lewis Hamilton and three-time F1 champion Niki Lauda who is non-executive chairman of the team. It also came after the three years of poor performance on track which, in December, claimed Mercedes veteran Norbert Haug's position as Mercedes head of motorsport. Brawn has denied that he will leave but some F1 watchers have linked him with a switch to Williams or even Ferrari. Now comes F1 boss Bernie Ecclestone's take on the situation.

Writing in today's CityAM Pitpass' business editor Christian Sylt reveals that Ecclestone thinks Brawn is not likely to stay. "They have got Toto there and they have got Niki. That will probably be enough," Ecclestone told Sylt.

In addition to Lauda, Wolff and Brawn, Mercedes' also employs former Honda team principal Nick Fry as its chief executive. The above average number of senior management has driven speculation that Fry or Brawn may not stay.

The team has only won one race since it was taken over by the German car manufacturer in 2009 and Wolff told Sylt in an exclusive interview that "the system at Mercedes needs to work. If you have more good people it is rather not bad news but I think everybody needs to be understanding of what his role and position is. I think we are all pretty much complementary to each other. It is about finding the right structure."

Mercedes has also been linked to veteran technical director Paddy Lowe who it was thought was being lined up to move from McLaren to replace Brawn. Lowe was not present at the McLaren launch yesterday though team principal Martin Whitmarsh confirmed that he will remain with the team for at least this year. Wolff would not confirm or deny the talks with Lowe though he admits that Lauda's role involves head hunting new staff.

"To be honest, I don't know Paddy Lowe very well but somebody who has been 20 years at McLaren is going to be good and the same would apply to Ross Brawn who has won so many world championship titles. So I think we have to wait and see how it is going to evolve within the structure and then make the right decision." He adds "Niki is our top head hunter and for me it is about settling in and first of all finding my office in the building and then I can make a proper job of it."

Wolff had been at Williams since 2009 and he says that although he didn't achieve all his goals there, the structure is in place for the team to succeed. "Have I achieved all my goals? No. Obviously the goal must be competing for regular wins and the championship and I think that the team is on its way there. It is going to take a while because you need resources and even if you have resources, as we have seen with Red Bull, it takes some years. But they are on their way."