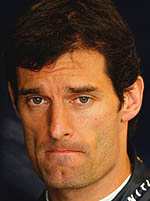 Red Bull's Achilles heel struck again in Austin as Mark Webber was forced out of the race with an alternator failure.

The Australian, who was running third at the time, was first told by his team that he'd suffered a KERS failure, before his car rolled to a halt soon after.

"It was the alternator ultimately in the end," said a dejected Webber after the race. "We lost the batteries on the car, we lost KERS, we lost our gearbox sync.

"The laps before I retired I was in trouble and we knew it was a long way home from there. It's disappointing to lose a very good result here today for myself and the team, and for sure there are more nerves about our reliability."

Webber's demise prompted heightened concern for teammate Sebastian Vettel. Leading both the race and the championship the German could ill afford a retirement given Fernando Alonso's rise to third place.

Vettel ultimately conceded the race lead in the closing stages, and while he was able to stay with Lewis Hamilton's McLaren he was not able to challenge him in the final laps.

Even with Webber's result Red Bull secured its third consecutive constructors' title, while Vettel increased his lead over Alonso by a further three points to 13 with just one round remaining.