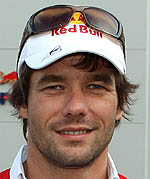 At a time when Sebastian Vettel is still fending off talk of a move to Ferrari, it was interesting to see another Sebastien in action in a Red Bull sponsored McLaren at the weekend.

The McLaren in question was the MP4-12C GT3, entered by Sebastien Loeb Racing, which is sponsored by Red Bull and wears the drinks company's famous blue and silver livery, which the Frenchman, and teammate Gilles Vannelet, raced to third in the French GT Championship finale at Paul Ricard.

Loeb, who recently secured his ninth successive rally title (F1 fans look away now) at the Rallye de France, completed the final stint of the endurance race. Had it not been for a botched pit stop - no jokes please - the Frenchman might well have finished second, but, nonetheless, impressed many as he got stuck into a number of battles.

"What I like about racing is that it's never taken for granted that I'm going to win," he told reporters after the race. "It's basically like starting all over again, and that's a lot of fun."