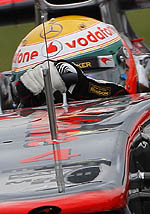 Lewis Hamilton: "I don't yet understand why I got such a poor start - it lost me ground and then I fell under attack from the guys behind. During the first lap, I was primarily focusing on not colliding with Jenson, then I saw Fernando [Alonso] in my right mirror. He was towing me from very far back. Even if I'd had a better start than I did, the guys in front were still maybe a bit too fast, particularly in the first stint.

"During that first stint I started having a downshift problem - I was having to change down with my right hand instead of my left, so the team elected to change the steering wheel at the pitstop.

"I've never had to change a steering wheel during a race before. We've done it in Barcelona testing before, but never in a race. Even so, the guys did it fantastically quickly, under immense pressure, so I want to say 'well done!' to them all. I took the wheel off before I'd even stopped the car, and threw it out of the car. The team then fitted a new one, I clicked it into first gear, and I was away - all in just a bit over three seconds flat.

"I tried to chase down Mark [Webber] in the closing laps, but by then it was too late and he was going too quickly for me to be able to mount a serious challenge. But I never give up, and, right until the very last corner, I thought I might just be able to catch him, but in the end it wasn't to be.

"Still, I loved it out there today - I can't remember the last time I've pushed so far, so hard, for so long, right on the limit - it felt great. It felt fantastic, in fact, to be in the middle of such a battle. I'm so proud of all the guys in the Vodafone McLaren Mercedes team, too - it was a really great race."

Jenson Button: "The start of the race was my highlight - there were just millimetres between Lewis, Fernando and me. I've never had a start quite like that before - unbelievably hard-fought - and none of us hit each other. It was so close, so tight, yet so clean. It's just a pity that the rest of the race wasn't as enjoyable!

"My first stint was pretty disappointing; I think maybe we struggled more on the Options [tyres] than the other runners did, so I couldn't keep the guys behind me. I then made my pitstop earlier than anticipated, so that we could find a better balance on the harder tyre, but that didn't work out because I got stuck behind Romain [Grosjean], which lost me more time.

"But getting fastest lap on the final lap was great, and I think there's plenty of potential that we can build on and take with us to Abu Dhabi next weekend."

Martin Whitmarsh, Team Principal: "We scored 22 world championship points here today, but we'd hoped to score quite a few more than that.

"We found it difficult to coax sufficient pace out of the Options, but our car was the fastest in the field on the Primes. The trouble was, by the time we were running on Primes, the gap to the cars ahead was a bit too large. Even so, Lewis pushed as hard as he possibly could in the closing stages, carving chunks out of the gap between him and Mark ahead, and, if the race had been just a few laps longer, I'm certain he'd have fancied his chances of getting past.

"Jenson, too, drove superbly, in difficult conditions, losing quite a bit of time while stuck behind Romain, but he made as rapid progress as Lewis did once he'd got onto Primes. Indeed, he drove the fastest lap of the race on the very last lap. It was McLaren's 150th fastest lap in world championship grand prix racing, incidentally.

"Finally, here's another stat for the train-spotters out there: today, Vodafone McLaren Mercedes tied Ferrari's all-time record of 55 consecutive world championship grands prix in the points. We started that run in Australia in 2010, which race Jenson won for us of course; indeed, Vodafone McLaren Mercedes has scored points in every single grand prix since Jenson joined our team.

"In Abu Dhabi, in a week's time, we'll be seeking to establish a new benchmark: 56 consecutive world championship grands prix in the points. In fact, of course, we'll be aiming to do a bit more than that: there are three grands prix still to run this season, and you can be well sure that everyone at Vodafone McLaren Mercedes will be doing his or her level best to win as many of them as we possibly can."