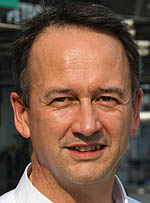 With time fast running out there is still no cast iron guarantee of the direction Formula One's engine regulations will ultimately take. While it is widely expected the sport will move to small capacity turbo engines there are lingering doubts and vocal opponents to the idea.

Bernie Ecclestone, Ferrari boss Luca di Montezemolo and even the circuits themselves are against the concept, voicing their concerns over how the engine note the new power plants will produce will impact the viewing public.

However, Mercedes seems determined to make it happen. Despite the ongoing uncertainty, the German marque has continued its development unabated, and it's not alone. Cosworth recently confirmed that its planning for the expected engine change, despite the lack of clarity in the regulations, while this week Honda hinted it could be lured back to the sport in the future.

Renault's position is less clear. While the French company is believed to be strongly in favour of the smaller capacity turbos its most successful customer, Red Bull, is understood to be rather less enthusiastic. Sister team Toro Rosso receives its engines from Ferrari so perhaps the Austrian drinks company is simply trying to remain quiet so as not to rock the boat given its two engine suppliers sit on opposite sides of the debate.

"Welcome to the world of Formula One," laughed McLaren's Managing Director Jonathan Neale when asked about the situation during the latest Vodafone McLaren Mercedes Phone-In.

"Formula One doesn't exist in a bubble and has to be mindful of its market and changes in technology," he elaborated. "We also have to be mindful and respectful of the amount of money that has been invested so far by all of the engine manufacturers and any decision to delay that would probably cost them more money.

"Formula One has to remain investable and for that to happen we need some kind of stability on when changes are brought in. We can't play Russian Roulette with the investors' money," he added. "I'm confident that behind the scenes that there is a lot of work going on.

"The new engine regulations make a really exciting proposition for everybody and I know that Renault and Ferrari and Mercedes have been working very hard," said Neale. "They meet frequently with the FIA who, for good reason, are wanting to introduce a better energy management system going forward that is relevant to the automotive manufacturers.

While Neale was confident the new regulations will be introduced as expected, despite the chorus of opposition, he stopped short of saying the sport would feature turbo engines in 2014. "We're obviously very close to Mercedes in that and we look forward to racing a Mercedes engine," he said, cannily avoiding a direct answer.