Neale: No rift at McLaren 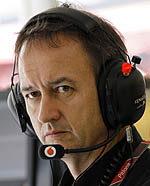 Mat Coch writes:Lewis Hamilton and Jenson Button have cleared the air ahead of this weekend's Korean Grand Prix.

Hamilton caused a slight stir during the week on Twitter when he thought teammate Button had 'unfollowed' him. While he soon realised his mistake it prompted many to suggest that the atmosphere at Woking was becoming somewhat tense since the 2008 champ announced his decision to move to Mercedes.

"Lewis has already spoken to Jenson in Mokpo so I don't have any concerns about that," revealed McLaren's Jonathan Neale in the latest Vodafone McLaren Mercedes Phone-In.

"As for Twitter itself it is obviously an important part of the marketing and news space but it has its issues and it's just one of those things. (You) just kind of shrug the shoulders and say that was a bit unfortunate."

Neale denied the incident had soured things within the team, which he maintains is fully focussed on its championship ambitions. "There are still five races to go and anything can happen," he said. "Despite whatever else is going on around us in regulations or the media or everything else we're a focussed race team."

The Woking squad lost ground to title rivals Red Bull at last weekend's Japanese Grand Prix as gearbox and setup issues hampered its progress. Hamilton opted for a setup which ultimately proved less than ideal, and was hampered mid-race by some debris which lodged itself on his car, while a small brake duct fire caused minor electrical issues for Button's gearbox.

While neither was cataclysmic, both issues hurt the team. "Since about 2006 to 2012 the margin of performance difference between first and tenth on the grid is getting narrower and narrower," Neale explained. "So you pay heavily for small mistakes.

"It's been difficult for the teams to string a consistent run, period of runs together," he added. "We've invariably had one car that's been strong and quick and the other car some grid spaces further back for some reason or another.

"We have strung a series of wins together, so the win rate is encouraging. But the consistency, we have struggled to get that in place."

"I think that Fernando did, or has done, a good job with the Ferrari all year," admitted Neale. "I thought he was very unlucky to get tagged as he did in the last race and end up in the gravel on the first corner. That's obviously produced a window of opportunity there for Sebastian.

"But the running order at the top has changed over the last six races from time to time and I think there's a long way to go in this season so far. I hope that the Red Bulls are not as dominant in performance in Mokpo as they were in Suzuka and we're working very hard on that.

"We go into this race with better certainty about our car, and some performance upgrades, and we expect to be on par with the Red Bulls. But you never know what everybody else is doing," he continued.

"It appears at the moment that the top three teams have still got their foot in this championship and are bringing upgrades and refuse to give up. It's going to be an interesting five races."