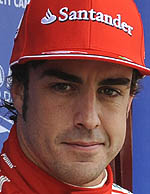 Two-time world champion Fernando Alonso believes the unpredictability of the 2012 season could damage the sport.

On the streets of Monaco last weekend, Mark Webber became the sixth different winner this season - the first time this has happened in the history of F1 - while his team became the only team to win two races this year.

While some are enjoying the 'randomness' of it all, others are of the opinion that the results are virtually manufactured.

"I think people stand in front of the TV with some surprises every race," said Alonso, according to CNN. "It's good for the audience, it's good for the sport to bring attention to the races. On the other hand we can lose credibility.

"What you achieve in Formula One is not by chance. We need to make clear that if you win a race, it's because you did something better. And I don't think at the moment that this is clear for everybody."

On the other hand, the Spaniard had some encouragement for his teammate, Felipe Massa, who finally kick-started his season last weekend.

''It's hard to think Felipe won't win many points in the second part of the season, that he won't make podiums or fight for wins," said Alonso. "He's got the talent for it.

''It's been an unfortunate start to the season because of a number of things," he continued, "bad luck, a slower adaptation than before to the tyres... Felipe's results weren't normal."