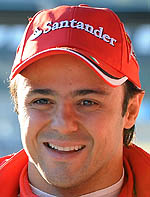 With all manner of rumours doing the rounds, Felipe Massa admits that after a difficult start to hi season things should start to improve from this weekend.

The popular Brazilian, who famously was world champion for all of thirty-nine seconds back in 2008, is having another difficult season, having contributed just two pints to Ferrari's pot of sixty one.

However, talking to reporters in Monaco, and amidst rumours that this could be one of his final races for Ferrari, the eleven-time winner insisted that things are going to improve.

"I hope this weekend is where one can consider that my 2012 championship will begin," he said. "Especially as this really is my second home race, as I live here for much of the year. So I hope this weekend goes better than the previous races.

"This is a different race to pretty much all of them," he continued, "with the exception of Singapore, which is a bit similar and therefore I hope it can be a new beginning for me.

"I have had a few difficult times in my career and maybe the start to this season has been the most difficult so far. So, we need to get out of this situation, to get back on a good direction and that is what I am concentrating on. I have had to deal with the technical side of the problem, but also it causes a mental side, as it is not easy to deal with this situation. But if you fix one, then it is easier to fix the other."

Asked for his view of the season thus far, and how it is shaping up in terms of the titles, the Brazilian admitted that, like the rest of us, he can not yet see a clear picture.

"Normally the best cars will come out on top, but at the moment, it's hard to be sure exactly which ones are the best. At the moment, it is hard to tell which car is capable of scoring the most points in every race. That's because we can expect the situation to change often from one track to another, as we have seen with cars that should have been strong at some tracks this year not matching that expectation. Normally, after a few races, a championship starts to take shape and you can see the direction it is going in. But this year it is much harder to get a clear picture."

As for this weekend, Massa was equally cautious in his assessment of the prospects for the F2012: "If we accept that two of the F2012's weak points - even if we have made improvements - are traction and top speed, then at least top speed is not an issue on this slow street track, so that could be a help for us here," he offered. "As usual, we must wait and see what happens in practice before understanding the situation."