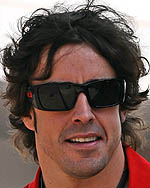 For Scuderia Ferrari, the result of the final qualifying session of the 2011 season ended in almost identical fashion to the very first one: in Melbourne's Albert Park, Fernando Alonso qualified fifth and Felipe Massa was eighth, while this afternoon in Interlagos, the Spaniard again recorded the qualifying position he has started from most often this year, nine times in total, while the Brazilian went one better than back then, which will see him start from the clean side of the grid. Tyre useage through the session was as follows: Fernando used two sets of Medium tyres in Q1, one of Soft in Q2 and two Soft in Q3, all of them new. After a first run on Medium in Q1, Felipe went out as a precautionary measure on a set of Softs, which he then used again for his first run in Q2. Here he had to make use of a second set, thus finding himself with just one set of new tyres for Q3, which led to him opting for just a single timed lap.

Stefano Domenicali: If the numbers and the equation are always the same, there is no reason for them to deliver a different sum! We ended development on this car several months ago and everything we are doing now is aimed at next year. In the meantime, we are trying to squeeze out the maximum from what we have got, in order to finish this season in the best way we can. The outcome of that therefore is that today it was difficult to expect anything more than a fifth place, don't you think? Fernando gave it his all on his final lap, getting very close to the McLarens. Felipe probably paid the price for having only one set of new tyres left to run in Q3: if he'd had one more, he would have also managed to make it onto the third row. We go into this final race of a very long championship in the same way in which we have tackled the others: with concentration and determination aimed at getting the best possible result. The weather forecast for tomorrow is for a high chance of rain: in that case, anything can happen and it will be crucial to react properly to any eventualities that might arise.

Fernando Alonso: My subscription to fifth place has been extended for one more Saturday! This time however, getting to my classic starting place on the grid was a bit more of a struggle than usual. We are not very pleased with the balance of the car and we were expecting a very competitive Mercedes. However, in Q3, we got much closer to the McLarens than we could have expected, while the first of the Mercedes was left a few tenths back. What this means is that we managed to get a little bit more out of it than our potential would indicate. I certainly can't say the way qualifying went was much of a surprise. If it really rains tomorrow, it will be a very exciting and open race: no one really knows how competitive they can be in the wet and then it requires next to nothing - one lap more or less out on track at a time when the conditions change - to turn around a situation that looks set in stone. It's true that for us, the problem of getting the tyres up to temperature are more acute in the wet, but then it's equally true that when the track does dry, we are quicker than our rivals: the various stages of the race at Silverstone demonstrated this to be the case. If however, we were to race in the dry, then maybe there will be a lot of stops because today the tyres seemed to degrade more than yesterday. The perfect recipe for the last race of the year? The four in front of us stop and me and Felipe are ahead of the rest!

Felipe Massa: I was expecting more from this final qualifying of the year and I definitely cannot be happy with this seventh place. Unfortunately, we were unable to find the right balance throughout the weekend. In some corners I was locking up the front and in the slower ones I suffered with understeer, in others I lacked traction: all in all, the car was rather difficult to drive. On top of that, it was a rather complicated day. I had to use two sets of Softs in Q2 and I paid for that in Q3, as I could only do one run. Tomorrow it's supposed to rain so the situation could change. It's difficult to make predictions on the relative strengths: this year in the wet, sometimes we have seen a very strong Red Bull, other times McLaren have been very quick, but it's also true that anything can happen in these conditions. The important thing is to be prepared for all situations. For me, it's always a fantastic feeling racing at this track, in front of my amazing home crowd: I will try my all to do well and to finally make it onto the podium at the end of such a difficult year. It would be a nice way to end my tenth season in Formula 1 and to celebrate in a worthy manner my hundredth race with Scuderia Ferrari.

Pat Fry: Honestly, there's nothing much new to say at the end of the final qualifying session of 2011. We are aware we have the third best car in the pack: the consequence of this is that, if nothing strange happens, then fifth place is the most logical result. Then, taking into account that we did not manage to find a perfect balance on the two cars and that here we have seen a Mercedes very much on the ball, we must look at this result as a glass that's half full, considering the gaps to Fernando of those directly ahead and behind him in the classification. Felipe had to use an additional set of softs in Q2, which definitely penalised him in Q3. Given the weather forecast, we can expect an eventful race. However, if it is run in the dry, then it will be interesting to see how the tyres behave, considering that the track conditions seem to change significantly even when there is not much of a big change in temperature. Our aim will be the same as ever: to fight for a place on the podium, while trying to help Fernando to reach second place in the Drivers' Championship.