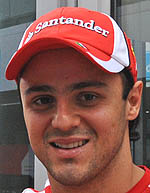 While this weekend's race at Interlagos is Felipe Massa's 153rd Grand Prix, it is his 100th outing for Ferrari

"This will be a very important weekend for me," admits the Brazilian, "as it will also mark the end of the tenth year since I first raced in Formula 1, although not ten years of competition, as I was a Ferrari test driver in 2003.

"Fortunately, I am still young and there is more to come, but ten years is still a landmark in an F1 driver's career," he continued. "Then there are my six years racing for the Scuderia, competing in one hundred Grands Prix for the team, which makes me one of the drivers who has raced the most for this team. Therefore, putting it all together, ten years of Formula 1, one hundred races with Ferrari and all of it at home in Brazil, makes this something really special for me. It will be an emotional time and what I would like to add to it all would be a good result come Sunday afternoon."

In 48 Brazilian Grands Prix, Ferrari has won 10 of them, Massa twice standing atop the podium of his home race. "They were both incredible," he recalls. "Even the one in 2008 when I won and came so very close to winning the drivers' title. And my first win at home was the realisation of a dream, because for a Brazilian to win at home is almost like winning the world championship, so for those reasons the 2006 victory at Interlagos was the best of those two." Although Felipe's team-mate Fernando Alonso has never won here, the Spaniard has been a frequent visitor to the podium with two second places in 2006 and '08 and two thirds in '07 and last year.

Looking bewyond Brazil, the Brazilian adds: "This year has not gone so well, but we have tackled it with our usual fighting spirit and that is what we will take forward to next year, when we hope to have a very different sort of championship to this one just ending. The intention is to be competitive right from the start, fighting for the win in every race.

"This has not been a fantastic season for me," he admits, "but neither has it been for the team. So as a driver, I have a very strong desire which I share with the whole team to give one hundred percent to improve for next year."