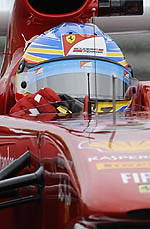 Twenty eight points for Scuderia Ferrari at the end of the Abu Dhabi Grand Prix, thanks to a second place for Fernando Alonso and a fifth for Felipe Massa. This is the team's tenth podium of the season, all courtesy of Fernando and it is also the first for both the Scuderia and the Spaniard in this race. Both drivers ran a similar strategy, based on two stops, with the Soft tyres used in the first two stints and the Medium in the third. After the penultimate round of the 2011 Championship, Fernando is still in the fight for second place in the Drivers' championship (+12 on Webber, -10 off Button) while Felipe needs a single point to be sure of sixth place.

Stefano Domenicali: We knew a podium was possible and that was confirmed this evening when, thanks to yet another extraordinary drive from Fernando, we were in the fight for the win right up until the final part of the race. The Spaniard's first lap was exceptional, as was his race pace after that. Felipe also got off to a very good start, in contention for a podium place, but then, on the Medium tyres, he struggled and was unable to run at a pace good enough to stay ahead of Webber. Finally getting a driver onto the podium in this race is indeed cause for satisfaction. Now there's one race to go, in two weeks time in Brazil. Second place in the Drivers' championship is still up for grabs. That will be hard to achieve but it is definitely not impossible and we will do all we can to give Fernando the tools to achieve this. Interlagos is also an important weekend for Felipe, whom I am sure will want to give his always enthusiastic fans something to cheer about.

Fernando Alonso: I am pleased with this result: finally my podium trophy collection is complete! I have seventy three top three finishes and I have managed to stand on the podium of all the circuits that have been on the Formula 1 calendar over the past ten years. Next year, we go to Austin and the year after to Russia, so there will always be new challenges to tackle and objectives to reach even if, obviously, the main one is always to win the title. It's clear what will be the objective for me and all the team next year: winning the title. Today we were fighting for the win all the way to the end. We got a good start and could match Hamilton's pace. The first pit stop went well, while I lost a couple of seconds at the second one, what with traffic on my in-lap and a problem changing the front left wheel, but I don't think that's where we lost the race, because I am convinced that, in the end, it's the quickest car that wins and so it was. The opening lap was exciting: at the start I squeezed round the outside of Webber at the first corner because I knew there was more grip there then, once I saw Vettel was off, I got into Button's slipstream, taking a bit of a risk but, in the end, I managed to pass him too. After that I expected to struggle more, but today was one of those where the car went much better than expected and you are kept busier fighting with those ahead of you than in looking in your mirrors. I hoped right to the end I could do it, because maybe Hamilton might also have had some problems with KERS like Button did. Even if we have not fought for the title it has still been a good season: we have improved a lot as a team and learned a lot.

Felipe Massa: I cannot be happy with this fifth place. Things were going reasonably well while I was on the Softs, but with the Mediums I was really struggling to keep the car on track because of the lack of grip. That's why I ended up spinning on lap 49, losing any remaining hope of staying ahead of Webber. In the first stint I could fight with Button and the Australian, but I always had the thought in my mind that, in the final stint, I'd be in trouble. The fact I could not use the new front wing was more of a penalty when running the Medium tyres than the Softs, because with the harder compound you could feel the lack of downforce more. Now we go to Brazil where I will have the support of my home crowd: I am sure that will help me try and finish well this season that has definitely not been a positive one for me. Even if it's obvious, I want to state clearly that, despite everything, I am absolutely motivated for next year. Along with the team, I will work to have a more competitive car and then you will see everything will be different.

Pat Fry: A nice result thanks to Fernando driving an attacking race from start to finish, after producing a fantastic first lap. The pace on the Soft tyres was what it should have been, so we were always close to Hamilton. In the second stint of the race, Fernando got a bit caught up in backmarker traffic and lost at least a couple of precious seconds, but then, even if we had made a perfect pit stop (we lost around a second and a half at the second one) we would not have managed to get him out on track ahead of the McLaren man. Right from Friday, we realised our pace on the Mediums was not as good as that of our closest competitors, so after that we could not attack. From a strategic point of view, we tried to exploit our better tyre degradation but, unlike what happened in India in our duel with Webber, here, the move did not work out. Felipe drove a good first part of the race, but then he struggled more than his team-mate with our difficulty on the harder compound. In any case it would have been hard to stay ahead of Webber, but his spin robbed him of any remaining opportunity. Now we have three days of very important testing, the only ones we have between now and February: it presents a great opportunity to try out new ideas, to resolve some problems we still have and above all, to give a talented youngster like Jules Bianchi some more experience.