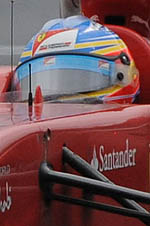 Fifteen points for Scuderia Ferrari in the inaugural Indian Grand Prix, thanks to Fernando Alonso's ninth podium finish of the season, this one a third place. Unfortunately, his team-mate Felipe Massa had to retire on lap 33 when the left front suspension broke through a series of contributory causes. Fernando pitted twice, using the Soft tyres in the first two stints of the race and Hards in the third and final one. Felipe, who started off with one less set of Softs than his team-mate was on a similar strategy. After the seventeenth round of the Championship, the team and driver positions remain the same in their respective classifications: Fernando is still third in the Drivers, with Felipe sixth: the Scuderia is still on the lowest step of the podium in the one for Constructors.

Stefano Domenicali: The result of this grand prix could be described as bitter sweet. On the one hand, there is the satisfaction of seeing Fernando on the podium, which given our current situation in this last run of races, represents our most realistic target. Once again, the Spaniard drove a great race, fighting lap after lap to bring home another trophy to add to his collection. On the other hand, there's disappointment for what happened to Felipe, who could have got a good finish, given the pace the Brazilian was demonstrating. As regards the incident with Hamilton, as usual Ferrari respects the decision of the Stewards, even if, in this case, we have a different view to theirs. It's true we did not have the pace to fight for the win, but I think everything we are doing in these final races will have a great importance when it comes to the 2012 season. We are learning a lot and we have to continue like this for the two remaining Grands Prix this year. Finally, let me say that seeing a Ferrari on the podium at the inaugural Indian Grand Prix was very pleasing, given what this market could represent in the near future.

Fernando Alonso: It's nice to jump on the podium for India's debut in Formula 1 and I'm pleased to have a new trophy to take home. However, today was a special day, full of contrasting emotions. In fact, the satisfaction at getting a podium finish cannot cancel out the sadness which has been with us for several days, because of the deaths of two of our colleagues, two special people – Dan Wheldon and Marco Simoncelli. After this race, second place in the Drivers' championship is still possible, but it will be very difficult because McLaren is on great form at the moment, even if the gap is only 13 points. We are aware that on paper, we are behind the two Red Bulls and two McLarens: then, if something unusual happens, we can make it to the podium. Today, the team was fantastic, managing to fix a problem on the front wing which was only identified twenty minutes before the start. At the start, I did not get away particularly well and so Button was able to pass me. Then I tried to stay close to Webber and when he slowed down a bit, I closed right up and, staying out on track a few laps longer than him, I was able to get ahead of him. Being patient paid off. Now we head for Abu Dhabi, a race that is a bit unusual... Maybe I will go to the Ferrari Park to play golf to relax prior to the race and then, on Sunday night, I will try and bring home the only trophy not yet in my collection.

Felipe Massa: There's not much to say at the end of a weekend like this. I am really unhappy that I was not able to finish a race in which I showed I had the pace to fight for the podium. As for the collision with Hamilton, I can only say I do not share the opinion of the Stewards who inflicted the punishment. I simply stayed on the ideal line, braking on the limit and staying on the part of the track that was rubbered in. What else could I do? It's the umpteenth time that Hamilton runs into me this year and it seems it's some sort of fatal attraction... In the past, I tried to talk to him but he did not seem to be interested in doing so. Now it's best to immediately turn the page and think of the final two Grands Prix of the year. They are both special, because Abu Dhabi is a sort of second home race for Ferrari, with that amazing theme park which sits alongside the circuit and then comes Interlagos, which is always special for me. I will try and forget this trip to India as quickly as possible, but that will be absolutely nothing to do with the country!

Pat Fry: There are many elements worthy of note that have come out of this weekend in India. Again today, we had a suspension failure, this time the front left on Felipe's car: first analysis indicates the break was generated by a series of factors, starting with the collision with Hamilton. After that came the punctured tyre and it ended with the impact with the kerb. As for the front wing used on Felipe's car which has generated so much interest, we knew that in certain conditions, we could have been on the limit and when we saw that this situation might arise, we decided to change it for a different specification of wing. As for the race, we managed with our strategy to stay out on track longer than our closest opponent, taking back from Webber the position we had lost at the start to Button, thus getting Fernando to the podium. Honestly, our performance today did not allow us to fight for the win. On the Hard tyre, which we have not raced on since Barcelona, the pace wasn't bad, which is a sign that improvements introduced during the year on the car have seen us make progress in an area that was very difficult for us at the start of the season. We are working on two fronts and everything we can learn now will be useful for the future: these are all opportunities which should be exploited when they present themselves.