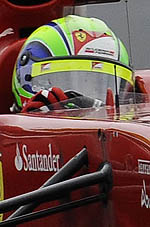 The two Ferrari 150º Italias will start the Korean Grand Prix from the third row of the grid. That was the outcome of qualifying which saw Felipe Massa outpace his team-mate Fernando Alonso. The two Ferrari men took slightly different routes through the three sessions: while in Q1 both men used one set of Primes, in the second, Felipe used two sets of Options and Fernando only one. The Brazilian then tackled his first run in Q3 with a set of Options he had used in Q2, while the Spaniard used his two remaining sets of the same compound, although he aborted his final flying lap.

Stefano Domenicali: The entire team is very sad, because one of ours, Pasquale Danza, passed away today. He worked at Ferrari for a very long time with great passion and dedication. On behalf of everyone at the Scuderia I offer our sympathies to his family; all our thoughts are with them and him at this moment. You can therefore understand that it's difficult right now to comment on qualifying…We definitely cannot be surprised at the outcome, because we are well aware of the potential we have at our disposal. However, that does not mean we are resigned to it, quite the contrary in fact. Only eight days ago we were in an almost identical situation and then, 24 hours later we came very close to winning. Therefore, let's wait and see how things go tomorrow and then we can add up the figures from this weekend.

Fernando Alonso: I can't be happy with sixth, but the position reflects our current situation: McLaren and Red Bull are stronger than us so it just leaves us to fight between ourselves for fifth and sixth places. That's how Saturday goes, but maybe tomorrow will end up like Sunday in Suzuka and we will find ourselves again fighting for the win. When tyre degradation is very high, usually we are in good shape, but here the situation is not very clear, as the behaviour of the Supersofts over a long run and on full tanks is still an unknown quantity. We had considered using this tyre right from Q1 but then we decided not to take too many risks. Today, we were losing too much time in the first sector, where we lacked top speed. On my last run, I immediately lost a few tenths at the first corner and after that, I could not make up the time, so I decided not to complete the lap. Unfortunately, I start from the dirty side of the grid, which should be a major disadvantage here, so I hope I don't lose a place to Rosberg. We will have to keep an eye on what happens ahead of us and exploit the strategy in our favour. The new front wing? I don't like talking about individual components; on the one hand I think that's a job for the engineers, on the other, I prefer to share my opinions about it only with the team.

Felipe Massa: I am happy with my performance today. I think I got a good lap on my final run, after the first one in Q3, when I used the same set of Supersofts I had already run in Q2. My impression is that we are now also improving our Saturday performance, but there are still four cars in front of us and so the grid position stays more or less the same. Going into this Grand Prix there was a lot of concern about tyre degradation but, at least from what we have seen today, it seems to be less severe than expected. Let's see how things go tomorrow. I am confident: if nothing strange happens to me, as has been the case in the last few races, then I think I can do a good job. It was actually here, a year ago, that I stood on the podium for the last time: maybe tonight I'll watch the race again, even if the weather then was very different to what we can expect tomorrow. Finally, I want to offer my condolences for two people who have left us this very day: Maria Martins Bassi, my wife Raffaela's grandmother and Pasquale Danza, whom I first met ten years ago when I came to Ferrari and with whom I shared so many good times, both at the track and at Maranello.

Pat Fry: Once again this qualifying result is more or less what we could have expected. Getting a place on the front two rows depends more on others making mistakes than on our actual technical potential and today nothing differed from that. We brought a new front wing here, which will serve as the basis for the development of next year's car: yesterday we tried it in the wet and today we decided to continue with our learning phase, running it in qualifying, which means also using it in the race. I've been saying it for a few races now, we must exploit this last part of the season by trying to learn something useful for next year and the decision to run this wing was taken with that in mind. Tomorrow there will be one more unknown factor than usual, because we were not able to do the usual Friday job of evaluating tyre degradation with a high fuel load, however, from what we could see this morning, the situation seems better than expected.