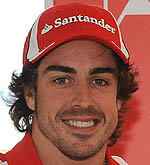 Rain was the main factor during this first day of the Korean Grand Prix. This morning it rained for the entire session and then in the second one, the track remained wet throughout. It was only towards the end that some tried dry tyres, but the conditions were not good enough to make the most of this choice. In the morning, neither Felipe nor Fernando set a time and then in the second session, they completed a total of 49 laps. This is a special weekend for the Brazilian as on Sunday afternoon, he will celebrate lining up for his 150th Grand Prix, at the wheel of a 150º Italia. To mark the occasion, Felipe has a special livery on the shoulders of his race suit and on his helmet, which reprises the colours of the Brazilian flag.

Fernando Alonso: It was quite a difficult Friday, with the weather changing throughout, making it almost impossible to draw any useful conclusions for the rest of the weekend. When one considers that it should not rain tomorrow or on Sunday, then it becomes even clearer why this day had little if any significance to offer. The objective is still to do the best we can and in this case, to understand as much as possible about the handling of the car at this track. We also had a new front wing to try, but it was definitely very difficult to evaluate it in conditions like these, conditions which were ideal for the McLarens for example. We need more laps to bring the tyres up to temperature and then, when we get there, maybe the tyres are already beginning to go off a bit. We will have to improvise a bit both in qualifying and the race. The entry to the pit lane is much improved compared to last year, but there is still room to do better with the exit.

Felipe Massa: Rather a complicated day. The track did not provide much grip and degradation on the intermediates seems to be more significant than usual: there is no other way to explain the fact that, even if an ever drier line was emerging, the times did not drop. Obviously, it makes it difficult to prepare as well as possible for the race and qualifying, but it's the same for everyone. The exit of the pit lane is difficult, as one could see from the collision between Rosberg and Alguersuari: I think efforts should be made to improve it for the future. 150 Formula 1 races is a nice achievement: those I remember most fondly are the ones I won, and that would even include Brazil 2008. The worst memories? Races like the ones in Hungary and Singapore that same year, where victory was within my grasp, but slipped away from me.

Pat Fry: It was a rather complicated day because of the weather. In the morning, there was too much water on track and there was no point in going out, given that tomorrow and Sunday we should have a dry track. In the afternoon, conditions were slightly better, but the track dried so slowly that it was never possible to run effectively on the dry tyres. We therefore tried to make a virtue out of necessity, getting as much as possible out of one set of intermediate tyres for each driver. With Fernando, we concentrated mainly on a comparison of two different front wing configurations and now we must analyse the data this produced. Of course, the grip level is pretty low: these are certainly not ideal conditions for us, as can clearly be seen from the time sheet. It will therefore be a slightly different weekend to usual: tomorrow, we have only one hour to try and find the best balance on the cars for dry conditions and then it will immediately be time to fight for the grid positions.