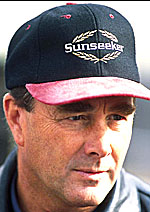 It's claimed that 1992 World Champion Nigel Mansell is being lined up by Sky Sports as part of its F1 broadcast team for next season.

While neither Sky, not any of those involved is saying anything publicly, it is widely believed that Martin Brundle is already on board, joining David (Dr Hibbert) Croft on the commentary team.

While Lee McKenzie is understood to be remaining with the BBC, Ted Kravitz is understood to have agreed a deal which will see him continue his respected pitlane role with the sport's new official broadcaster in the UK.

Writing in the Daily Mail, Charles Sale claims that Nigel Mansell is being lined up as a pundit while Sky's Rugby presenter Simon Lazenby is expected to host the programme.

With Sky yet to announce details of its coverage, certainly in terms of costs, one has to wonder if Mansell is a good move or bad, then again if it means viewers are not subjected to the highly excitable and unnecessarily controversial Eddie Jordan, anything has to be seen as an improvement.

While the BBC boasts of ever improving viewing figures and award nominations, it too has been remarkably reticent in terms of what sort of coverage it will be delivering next year and, indeed, why it reneged on the original deal in the first place.