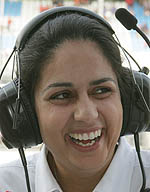 Sauber CEO Monisha Kaltenborn Narang, the only woman to hold such a position in F1, was born in India and is looking forward to the inaugural grand prix in her native country.

What does the first Formula One grand prix in India mean to you?
"For me personally it will be a very special experience, because for the first time I'll be able to combine my work with a visit back to the country of my birth - and, moreover, as part of the inaugural grand prix in India. As the team's CEO it's always extremely interesting to go to a new country with Formula One, as it opens up new avenues for a team. It can generate new partnerships - in this case with Indian companies - while existing partners gain access to another important market. We're delighted to have Amul, one of the best known and strongest brands in India, on board for the grand prix. For me there's also a personal element in this agreement, as I remember Amul products from childhood, of course. I was particularly keen on their butter."

When and why did you leave India?
"My parents and I left India in 1979, when I was eight. We didn't have any pressing reason to relocate abroad, but back then there were a lot more options in terms of further education outside India, and my parents wanted to give me those opportunities. Besides, our family business, a two-wheeler dealership, was hardly a labour of love for my father. The obvious move as far as my education was concerned was to settle in an English-speaking country, but instead we ended up in Austria. Vienna was our first port of call after leaving India, as my father's uncle was working at the atomic agency in the city and we liked it there. When we arrived I started at an Austrian school rather than an international one, as my parents thought it was important for me to learn the language properly and integrate into Austrian society. After leaving school I also completed my law studies in Vienna and took Austrian citizenship. That gave me a lot of administrative benefits, but I also had a strong connection with the country, of course, after spending a significant part of my life there. I'm still an Austrian citizen, although I now live in Switzerland and am married to a German."

What memories do you have of your childhood in India?
"I have very good childhood memories of India, especially of how my grandparents used to spoil me; for a long time I was their only grandchild. I also have some fond early memories of school in India and of friendships from back then. I attended Welham Girls' High School in Dehradun, where I was born. The city is in the north of the country and one of the oldest in India. Welham was a renowned girls' boarding school, and it served me very well. At home I had three dogs, whom I loved dearly."

Can you still speak Hindi?
"My Hindi is no longer very good, unfortunately, as I haven't had much chance to speak it for a while. But that's changing, as I try to speak Hindi with my kids now and again. My son is nine, my daughter six, and I'd like them to learn the language. My parents are making a real effort on that front, so the children pick up more from them than they do from me. We've got to the point now at home where we only use Hindi for certain words. For example, no one says 'tea' in our house - that's 'chai'. And when the children were smaller and wanted to be picked up, they'd always shout out 'godi'. My German parents-in-law even started using the expression."

Did you still make frequent visits home after emigrating to Austria?
"Yes, I made regular trips back while I was at school and studying. And my husband and I were married in India according to Hindu tradition, so it was a big, colourful and very happy celebration. Our visits back have become a little less frequent since the kids came along, though. And since 2010, when I've travelled to every grand prix, we haven't had any time to get over to India. So I'm particularly looking forward to going back this time."

How would you assess the level of interest in Formula One in India?
"I think there's a lot of interest within the country. I get the impression that excitement has been growing significantly over recent months. The closer the grand prix gets, the more media enquiries we've been fielding from India. It's not easy for any sport to find a space in the public consciousness there alongside cricket. But I'm sure that this grand prix will represent a big step towards establishing our sport in India."

How important is Formula One for India, and how important is India for Formula One?
"This year's Formula One schedule comprises 19 races in 18 countries, and it's right and proper that India is now part of this exclusive group. The decision to add India to the calendar reflects the country's global and economic standing. India also represents a very big market for Formula One and, as such, has huge potential for many companies, some of which are already involved in the sport. Plus, India ranks as a high-tech hub nowadays and boasts extremely well-qualified specialists. The grand prix could open doors for more engineers and companies to find their way into Formula One. As I see it, incorporating India into the World Championship is a good move both for the country and for Formula One."

Is there a part of your character that you would describe as typically Indian?
"I have a certain calm and openness, which you might say are typically Indian. I can accept situations and deal with them as I find them. Often, getting worked up is a waste of energy, as you can't do anything to change the situation. The important thing is to respond to the new circumstances by retraining your sights and deciding how to move forward again from there. In 2009 we experienced a number of significant developments in a very short space of time. We had to accept what was happening as quickly as possible in order to deal with the new situation."

Before becoming CEO of the Sauber F1 Team at the start of 2010 you weren't really on the public radar. What is your professional background?
"After completing my studies, I worked for various law firms in Germany and Vienna. Then, in 1998, I moved to Liechtenstein to take up a post at the Fritz Kaiser Group, where I first came into contact with Formula One. As a legal specialist I was responsible for the involvement of FKG in what was then the Red Bull Sauber team. I then joined Sauber directly in 2000 and took over the running of the legal department. Since 2001 I've been a member of the Board of Management, so I've been involved in all internal processes as well as relations with the FIA, the FOM and the other teams."

To what extent do you see it as something special to be the only woman in such a position in Formula One?
"Given my career path - as we've just been discussing - my appointment did not come as a surprise either to me or to the team. When I took up the post of CEO I really wasn't aware that it would be an issue to people outside the team that I was a woman. I go about my work with passion and see no reason why being a woman should stop me doing that. I now realise, of course, that this is not taken quite so much for granted in all quarters. I'd be very happy if seeing me as CEO of a Formula One team emboldened other women with an interest in our sport to pursue their goals."

How would you assess the performances of the Sauber F1 Team so far in 2011?
"All in all, I'm quite happy with the season, especially when you think of the obstacles we've had to overcome since 2009. Our aim for 2011 was to make a clear improvement over 2010. We had a strong first half of the season overall. However, since then various factors have conspired to cost us points and chip away at the advantage we'd built up earlier in the year."

What are the team's aims for the remaining three races of the season?
"That's very clear: we want to reclaim sixth place in the constructors' standings after slipping down to seventh recently."

What are you hoping for ahead of the inaugural Indian Grand Prix?
"I'd like India's Formula One debut to be a wonderful sporting occasion and the Sauber F1 Team to contribute to the excitement of the spectators by putting in a good performance."