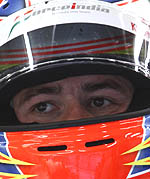 Paul Di Resta: "It's good to come away with a point, but ultimately we didn't have the performance to match Toro Rosso today. It looked like we might be able to hold off Buemi in the final laps to stay ninth, but we came up six or seven laps too short with the tyres and I couldn't hold him back. In terms of tyres, we probably should have been a bit more aggressive with the strategy and used my new supersofts at the start of the race, rather than the used set, but I'm not sure it would have changed where we finished. Still, every point counts come the end of the year and we've managed to gain a point on Sauber, which is important."

Adrian Sutil: "It was not the easiest race today and I'm disappointed that I missed out on points. The start of the race was okay, but Schumacher and Alguersuari came by me quite early on. I think our strategy was good and I made my first stop when the safety car came out, but our main competitor today was Toro Rosso and we just didn't have the pace to beat them. It's clear that we have to fight really hard in the final three races because the race pace of our close competitors is strong and we will need to score points to hold on to our sixth position."

Robert Fernley, Deputy Team Principal: "In many ways it was a fairly straightforward race for us. We initially planned to do a three-stop strategy with Paul, but switched to a two-stopper when the safety car came out on lap 17. We spent the whole race in a close tussle with Toro Rosso and they got the better of us in the end. They were particularly strong in the final stint and that's when Beumi was able to jump ahead of Paul for ninth. We're pleased to have picked up a point, but will work hard to improve our pace for the final three races. Our next stop is the team's home race in Delhi, which is an event that everyone in the team is looking forward to. It will be a historic race for Formula One and hopefully we can deliver a strong showing in front of the Indian fans."