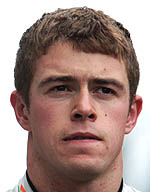 Adrian Sutil: "The track was damp all day so all we could really achieve was consistent wet running on the full wet and intermediates. In the afternoon the rain was not so heavy, but this circuit takes a very long time to dry so we were just driving around waiting for the track to improve, which didn't really happen. Even in the afternoon session the lap times were all quite similar and the track was not getting quicker. I tried the super-soft at the end of the session for a lap, but the track was not ready so I came straight to the pits. The set-up we had by the end of the day was not too far away from a dry set-up so I think we have found a good starting point for tomorrow."

Paul Di Resta: "Today was my first experience of the circuit so I just had to make the best of things in the wet conditions. It's not the ideal way to learn a circuit, but the team allowed me to do as many laps as possible and I gradually built up my confidence. The track was really wet in the morning and there was a bit of aquaplaning, especially through turns seven and eight, where the car was moving around a lot. The car felt okay running on the intermediates in the afternoon and there was a dry line appearing in the last 30 minutes, but the surface still felt very greasy. Like a few of the cars we went out on the super-softs right at the end of the day, but it was very difficult to keep the temperature in the tyres and you couldn't learn much. The weather looks set to improve tomorrow so we've plenty of work to do in final practice to get on top of the dry tyres and be fully up to speed for qualifying."

Dominic Harlow, Circuit Engineering Director: "We were expecting some rain for Friday and the forecasts were accurate. Adjusting the programme to suit allowed Paul the maximum possible laps for a general familiarisation, and our usual balance and set-up checks with Adrian. With evolving conditions it's difficult to draw too many conclusions and although both drivers had an attempt on dry tyres at the end of the afternoon, the track was not quite ready for them. But it's a really interesting circuit and the car balance is not too far away, so we are looking forward to a drier couple of days ahead. We will now try to produce the best performance we can for qualifying and the race."