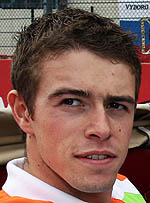 Ninth and tenth was the best Force India could hope for according to its drivers Adrian Sutil and Paul Di Resta. The duo made it through to the final phase of qualifying before electing to stay in the garage to save tyres for tomorrow's race.

"We weren't fast enough to beat Mercedes so we decided to save the tyres," admitted Sutil. "I think where we were, ninth and tenth, was the best we could do."

Both Mercedes drivers opted to go out in the final phase of qualifying, a decision Sutil believes may leave him with a chance to leapfrog the pair during the race. "We forced Mercedes to go out," he claimed, both Schumacher and Rosberg using a set of supersoft tyres. "That played out well for us."

"Saving tyres is very important," the German continued. "There was no need for us to run, so that was our decision and I'm happy with our decision."
Targeting Mercedes, the duo believe having fresh tyres will give them the edge as the race wears on. "It's going to be hard for the tyres but also with more rubber on the circuit it should be better. I can still choose my tyre sets for tomorrow, so that's another good point," said Sutil. "I'm not going to say what I'm going to do tomorrow, that's my secret, but I hope I have the right strategy."

After limited running on Friday that di Rested reached the final phase of qualifying was an achievement in itself. Brake problems in Free Practice 1 meant he was forced to sit out most of the session losing valuable track time. While satisfied with his performance he enters tomorrow's Grand Prix with a number of unknowns. "We're going in to a dark hole really because we haven't done any high fuel runs, we haven't got any tyre wear data on my car. We can only reference off the other chassis like we've done yesterday," he admitted.

Di Resta is also hopeful that fresh rubber will play in his favour, believing Mercedes will suffer with degradation issues. "Hopefully we've compromised enough to try and control that but their performance seems to be quite strong in terms of lap times, they're about a second quicker. That might start to close up on high fuel, but only time will tell, but we'll give it our best shot."

Though focussed on chasing Mercedes tomorrow the team can't help but look over its shoulder as Sauber loom just one point behind in the Constructors' Championship. "For the race we'll be aiming to take the fight to the cars ahead of us, but we also need to keep an eye on the guys behind because all the midfield cars have shown strong race pace recently." Sergio Perez starts one place behind di Resta in eleventh, while Kamui Kobayashi will line up seventeenth in the other Sauber.