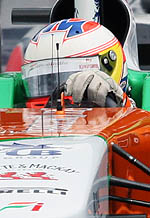 Force India moved up to sixth place in the constructors' championship this afternoon as Paul Di Resta delivered a strong drive to take eighth place and score four points in the Italian Grand Prix. Adrian Sutil was unable to finish after encountering a hydraulic issue with the DRS line in the early stages of the race.

Paul Di Resta: "Of course I'm really happy to finish eighth today after what hasn't been the easiest of races. My launch was not great, but the guys around me didn't get away well either. Going into turn one I could see a Williams coming towards me so I moved as far to the outside as possible, but there was no option but to bump across the chicane. After that we went aggressive with the tyre strategy and I think we extracted as much as we could because our ultimate lap time in race trim was not quite there today. So it's great to pick up four more points, which helps us move up a place in the championship."

Adrian Sutil: "I made a good start, but I was in the middle of a lot of cars and I couldn't really gain any positions. Then the biggest problem was Liuzzi spinning and hitting the field at turn one. I was on the inside and I had to go into the gravel to avoid the crashed cars, which cost me a lot of time. Fortunately my car was fine with no damage so I was still able to continue. I was running on the medium tyre so things looked okay and I felt points could still be possible. A few laps later the power steering went so I knew I had a problem. I tried to downshift into turn three and I couldn't so I had to park the car. As we saw with Paul's result, we missed out on getting two car in the points today."

Dr. Vijay Mallya, Chairman and Team Principal: "Another very entertaining race at Monza and a great performance from Paul and the team to finish eighth. We always believed that points were possible, but we had to fight hard and stay out of trouble. Paul did well to avoid a messy first corner and went on to drive a very mature race and beat some cars that were perhaps quicker on absolute pace. The strategy came to us and we made the tyres work to score four important points, which moves us up to sixth position in the constructors' championship. As for Adrian, he was out of luck today. He lost a lot of time during the first lap, but that soon became academic when his car suffered a hydraulic problem. So we end the European season full of optimism and look forward to racing in Singapore in a couple of weeks' time."