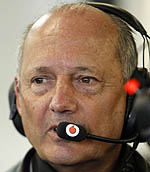 The departure of Mercedes as a shareholder in McLaren was one of those things which was never going to be good for either side.

So far, Mercedes seems to be the worse off from the arrangement. The German car manufacturer went from being a co-owner of McLaren, a team which had recently won the world championship, to co-owner of a team which has stood no chance of competing for the title since it took over. What's worse, Mercedes had to pay to buy it.

True, Mercedes received money for its shares in McLaren, and has reduced its investment in F1 since exiting the team, but surely it would have been better to spend a bit more and get better results on track? Mercedes' results (or rather its lack of them) may actually reflect badly on the car manufacturer and make its investment in F1 look to be of questionable value. In a bid to turn around its performance, it has recently gone on a spending spree hiring multiple former technical directors which will ironically add to its costs.

Now we come to McLaren. Not only did its owners - the group's executive chairman Ron Dennis, the Bahrain sovereign wealth fund Mumtalakat and the Saudi Tag group - have to get together the money to buy out Mercedes but they also lost the annual investment made in the team by the German car manufacturer. The impact of this is revealed in an article in the Independent by Pitpass' business editor Christian Sylt. This reveals that after-tax profits at McLaren fell by £34.4m to £15.8m last year, driven by the loss of investment from Mercedes. The team's accounts for the year ending 31 December 2010 show revenue of £148.7m, down by £26.1m on the previous year as investment from Mercedes slipped from £34.8m to just £2.6m. That's a massive fall of £32.2m.

In January last year F1's boss Bernie Ecclestone told Sylt that he thought Mercedes' exit would hurt McLaren and the loss of its investment seems to have hit the team in the wallet. McLaren most certainly has aspirations of winning the championship again and to do so it may well need to make up the money lost by the departure of Mercedes.

Perhaps not uncoincidentally, Pitpass hears that Dennis has become very close to Donald Moore, European chairman of the investment bank Morgan Stanley. Indeed, at Monza the two were almost inseparable.

Mercedes' direct spending on McLaren is believed to have been largely the purchase of branding on the team's cars. The loss of this funding means that McLaren's budget is now covered almost entirely by prize money and sponsorship, which remained largely unchanged in 2010. During the year the team extended its estimated £50m-a-year title partnership with Vodafone and signed new deals with Aon and X-Trade Brokers. This offset revenue lost as Santander scaled back its sponsorship and FedEx and Nescafe left the team.

Expenditure increased by 2% to £134.9m due to an increase in number of races from 17 to 19 and, ironically, a rise in one-off costs due to downsizing the workforce to comply with the Resource Restriction Agreement. As a result, staff numbers fell 6% to 345, with most of the redundancies being in the production department.

Turnover at the team's parent company, McLaren Group, was also down in 2010, sliding by £89.9m to £201.7m due to the spinning off of its sportscar manufacturer, McLaren Automotive, which had contributed £82.2m of revenue in 2009. A 40% increase in turnover at the group's electronics and catering divisions helped to partly offset the drop in turnover at the racing team.

Despite its effect on the team's profits, Mercedes' departure has not hit McLaren's on-track performance and it goes into tomorrow's Japanese Grand Prix with Lewis Hamilton and Jenson Button looking likely to consolidate the team's position as championship runner-up for the second year in a row. This is an improvement on the third place it managed in its last season under Mercedes' co-ownership. So although Ecclestone may have been right about McLaren suffering financially from Mercedes' exit, when it comes to on-track results, the boot is most certainly on the other foot at the moment.