Lotus slow off the mark with accounts 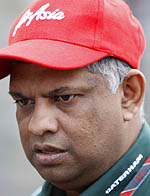 The directors of Team Lotus are facing the possibility of prosecution for not filing its accounts according to a report in the Express by Pitpass' business editor Christian Sylt. The Norfolk-based team is run by UK business 1Malaysia Racing Team and official records show that its accounts to 31 December 2010 were due by 14 July. However they have not yet been filed and team representative Ruban Ghandinesen says "the accounts are estimated to be lodged in November."

Companies House, the authority which governs businesses in the UK, says that "failure to deliver documents is a criminal offence. All the directors of the company risk prosecution. On conviction, a director could end up with a criminal record and a fine of up to £5,000 for each offence. This is separate from the civil penalty imposed on the company for late filing of accounts."

It adds that the reason directors could be prosecuted is that "they are personally responsible for ensuring that they submit company information on time." This includes Malaysian tycoon Tony Fernandes, who is one of the directors of 1Malaysia Racing Team which has already been hit with a £375 fine from Companies House for missing its deadline. The penalty is a drop in the ocean for Fernandes, who owns a 25% stake in the team.

Fernandes' net worth is estimated at £305m ($470m) and he has been on a buying spree of late. His fortune largely comes from being a co-founder of the Malaysian business Tune Group along with another 1Malaysia Racing Team director Kamarudin Meranun. Tune owns 26.3% of the Air Asia airline and in August it also acquired a 20.5% stake in Malaysian Airlines. In August Tune added premiership football team Queens Park Rangers to its collection where it joined historic British car manufacturer Caterham which Fernandes and Meranun bought in April.

Lotus has hardly been a front-runner but it has nevertheless managed to get a title under its belt: no other owner has invested more money in a team for such a long time without it scoring its first points. The team's owners have invested an estimated £60.3m ($93m) in it to race in 33 Grands Prix thus far. External sponsorship only provides an estimated £7.3m ($11.3m) of its £64.2m ($99.1m) budget this year with its biggest-paying backer being the US conglomerate GE.

As Pitpass has reported, data from business information firm Dun & Bradstreet shows that Lotus settles its bills slower than any other F1 team with payments made 20 days late on average between November 2010 and March this year. Combined with the late filing of its accounts it seems stuck firmly in the slow lane