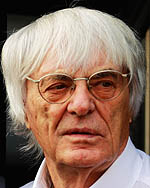 It has been nine months since German banker Gerhard Gribkowsky was arrested on suspicion of receiving a £32.4m ($50m) bribe in connection with the sale in 2006 of his employer BayernLB's 47.2% stake in Formula One to current owner, private equity firm CVC. F1's boss Bernie Ecclestone was suspected from the very start as being the person who paid the money to Gribkowsky and in July he was formally accused of paying it. He later admitted to Pitpass' business editor Christian Sylt that he paid the money but strongly denied it was a bribe or that it had anything to do with the sale of the sport. It has been a long time coming but we now know the prosecutors' version of events.

Despite Ecclestone's admission, rumours and speculation abounded: some reports suggested he may have paid Gribkowsky so that he would sell to CVC because they would keep him as boss of the sport. Others suggested Ecclestone paid Gribkowsky to stop legal action which the German had brought against him in 2005. Now we finally know exactly why the prosecutors believe Gribkowsky demanded the money and it is hard to fathom… to say the least. Sylt has got hold of the Munich public prosecutor's indictment against Gribkowsky and, for the first time, here are the details.

When Gribkowsky was arrested in January the prosecutors claimed that he received £32.4m in return for not carrying out a valuation of BayernLB's F1 shares at the time of the sale to CVC. The implication of this was that Gribkowsky was paid a bribe to arrange the sale of the F1 shares on the cheap. The indictment refines the prosecutors' allegations against Gribkowsky but what has not changed is their suggestion that he received a £32.4m bribe from the sale of BayernLB's F1 shares and this money should be returned to the bank. This is precisely why Gribkowsky has been charged with receiving a bribe.

It is worth pointing out here that Ecclestone says the reason he paid Gribkowsky is that the German had threatened he would otherwise report to the British tax authority false allegations that the F1 boss' controlled his family's Bambino Trust.

The trust was set up on 2 December 1997 in Liechtenstein for the benefit of Ecclestone's children and ex-wife Slavica. She was not domiciled in the UK and so, if Ecclestone had died, she would have had to pay 40% inheritance tax on the money raised by selling the shares he owned in F1. He owned 100% of F1 and, to prevent an unfairly huge tax bill being due on his death, he transferred the shares offshore to the trust so that his wife and children owned them and did not need to inherit them if he died. Given that he had heart problems, which led to a triple bypass in 1999, this was not out of the question at the time.

The one catch was that, as a UK taxpayer, Ecclestone was not allowed any control over the offshore trust otherwise it would be declared a sham and the tax would have to be paid on the money in its account. There is no evidence that Ecclestone controlled the trust but Gribkowsky still apparently saw an opportunity to gain from it.

According to the indictment, Gribkowsky's threats came just as the British tax authority was investigating Ecclestone and his wife so it would have been the worst possible time for the German to report the allegations. Ecclestone says that even though the allegations were false, the tax authority would have still had to look into them and, given that it was already carrying out an investigation, this could have derailed the trust.

By 2005, when Gribkowsky is believed to have started making his threats to tell the tax authorities that Bambino was controlled by Ecclestone, the trust had sold 75% of F1 with only a 25% stake under its ownership. F1 was run then by a business called SLEC with 75% of it held in a company called Speed Investments, which was owned by BayernLB along with two other banks - JP Morgan and Lehman Brothers - whilst the remaining 25% was in the hands of the trust's investment vehicle Bambino Holdings. The trust had raised $3.9bn (£2.4bn) so the 40% inheritance tax payment would have come to a cool $1.6bn (£1bn) and it would have been completely unnecessary. Accordingly, it is easy to see why Ecclestone was advised to pay Gribkowsky and, as he told Sylt, "the difference between that and a few billion is quite a big amount."

"There's normally a reason for things happening. I can't find out what the reason was for me to pay him," he says. For Gribkowsky to have received a bribe he would have to have done something for which he was paid in return and although the indictment clears up what this was, it doesn't seem to make much sense.

The indictment is 16 pages but the allegation of bribery boils down to the following six points.