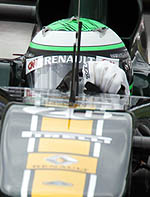 Heikki Kovalainen: "I'm pretty happy with that, particularly as it was one run, one lap to get it right, and I nailed it straight out of the box. We took the riskier strategy with the tyres, went out late in the session and I think I may have even been able to find a bit more in the first sector, but overall I'm pleased. I went through 130R with the rear wing open which was pretty hardcore, but having been bold with the tyres we're in a good position for the race tomorrow. There's been quite a lot of talk about the tyre wear here but I'm not sure the degradation will be as big a problem as people thought. The long run on the soft tyres yesterday was good - I think we can get maybe up to 15 laps out of them, and as we have a few new sets ready to go tomorrow it'll be an interesting afternoon."

Jarno Trulli: "That was a good session. The car felt much better this afternoon as we made the right changes to the setup and even though I made a couple of mistakes on my quickest lap I still don't think I could have got much more out of it. Tomorrow we'll fight as hard as possible in the race and give our Japanese fans something to cheer for. Our pace in the races has been good all season, so I hope I can make as good a start as I have been in a lot of the races this year, play with the tyre strategies and see where we end up."

Thierry Salvi, Renault Sport F1 Support Leader: "We have been working all weekend on giving the drivers the best engine maps for this circuit and I think today's performance in qualifying shows we have done a pretty good job on both cars. We need to make sure the engine has good driveability, particularly through the 'S' curves in the first sector where it is important to have a smooth power delivery that does not upset the balance of the cars, and the feedback we have had from both drivers, especially Jarno, is that we have achieved that, and the times we have seen this afternoon bear that out, so this has been a good weekend for us so far."

Mike Gascoyne, Chief Technical Officer: "A good Saturday for us in both sessions. Jarno and Heikki has issues this morning with understeer but we managed to dial that out for qualifying and their feedback was that they were both happy with their cars this afternoon. Jarno chose to do a run on the medium tyres early in qualifying to see if that could help him get more temperature into the brakes, and then the plan was always to do one run on the softs on both cars. We wanted to make sure we kept well clear of the cars behind and, with tyre degradation likely to play an important role in the race, give ourselves as many sets of tyres as we could for tomorrow, so job done."

Riad Asmat, Group CEO: "We keep edging ever closer to the teams ahead so where we finished up today is very pleasing. We made the right call on the tyre strategy, opting to save sets of the softs, and as we have seen all season we can mix it with some of the cars ahead in the race, so with the excellent way our pitcrew have been performing in the stops I think we are in a good position for the race."