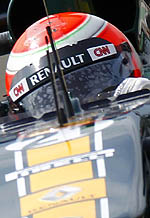 Heikki Kovalainen: "I headed out of Singapore on Monday and back to Europe to do a bit of work in the simulator before heading back out for the Japanese and Korean races. Singapore worked out really well for us and we all left feeling pretty good about what the new floor and diffuser had given us, and how we'd performed generally all weekend.

"Next up it's Suzuka, somewhere I think all the drivers look forward to and a track that's produced a lot of F1's greatest moments. Most guys will say 130R is the corner that really stands out - it's pretty hardcore heading in there at over 190mph and knowing you have to stay committed to avoid losing any time, but for me the best bit of the track is the whole run in S1 from T1 to T7. You go into T1 and T2 at high speed and you need to be committed to get the best out of the car through that fast, positive camber section, then from T3 right through to T7 is about the best sequence of turns we race in all year."

Jarno Trulli: "I've always loved Japan so I'm really looking forward to getting back again for 2011. I have a lot of really good support out there, and the fans are always generous and happy but without the sort of pressure I get in places like Italy! On track I'd just like to have a race without some of the bad luck that struck again in Singapore. I'd had such a good start and was holding off the Toro Rosso and both Renaults well, even running 11th at one point as we went into the first round of stops, but the puncture I suffered when Alguersuari hit me was just another one of those things. Hopefully in Suzuka I can make up for that and get as much out of the car as I did on Sunday around Marina Bay."

Mike Gascoyne, Chief Technical Officer: "Suzuka is without doubt one of the classic F1 destinations, both for what happens on track, and for its place in the sport's history. The circuit is very quick, it puts a lot of demands on the tyres and the cars need to have very good high-speed stability, particularly when they are closely following a car ahead so they can keep up the pressure into the braking zones.

"130R is all about commitment, guts and the right line, and straight out of that corner and into the chicane at T16 / T17 is about the best overtaking zone on the track, but we also see moves being made into the hairpin at T11 as there are a couple of lines you can take in there and if you have good traction out you can stay ahead of someone you have passed all the way back to the chicane at the end of the lap.

"Pirelli are bringing the Medium and Soft compounds to Japan and as the circuit predominantly affects the cars' lateral grip I think we will see degradation playing an even more pronounced role in Japan than it has throughout the rest of the season. With the small step forward we saw from our new aero package in Singapore I think we can use that and a bit of clever tyre strategy to take the fight again to the cars ahead, and if we can get qualifying right we have proved we can mix it in the races in midfield, so that has to be the aim again for the race - make sure both cars see the chequered flag and be there when it counts to take advantage of what happens around us."

Tony Fernandes, Group CEO: "2010 in Japan was our best race of the season - we finished 12th and 13th and essentially wrapped up our little battle for the title of fastest new team in Formula One, so it is a race and a country we hold very dear. I am delighted that we are heading to Japan next, both because it is a country that is very important to me personally, and to help The Japanese people show that their fantastic country is bouncing back from the terrible events there at the start of the year. We go around the world, doing business, racing, playing football and occasionally relaxing for a couple of hours, but we rarely have time to stop and take in what goes on around us, so it is good that we can go back to Japan now and help show that one of the greatest sporting events in our calendar is as successful, well managed and as great a spectacle as it ever has been.

"On the team side, I said after Singapore that that grand prix was just about our strongest ever race performance, and having been through the post-race reports it is very pleasing to see that our pace has definitely improved as a direct result of the upgrade package we brought out there. Jarno suffered again with bad luck, but the reliability issue that ended his race is still something we need to improve on - we may be small and we may not have the facilities of the teams ahead of us, but that does not mean our standards should be any lower than them, so we have to make sure in Japan, and at the remaining races, that we are a two car team that can help us guarantee tenth place this year. That is a reasonable aim and one everyone in the team is working very hard to achieve."