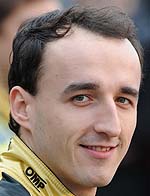 Today, Robert underwent one last scheduled operation in Italy, aimed at recovering the full mobility of his right elbow. The surgeons are happy to report that they have been able to complete 100% of their task and did not encounter any complications. They have described the outcome of the operation as "a total success".

On waking up, it was immediately clear Robert was in good spirits. Why? Well, as soon as he opened his eyes, he asked for the results of today's race!

He will now rest in hospital for a few days before resuming his rehabilitation and training programme.