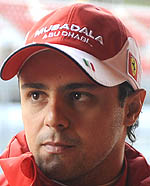 Short term memories are the bane of Felipe Massa's existence over the Abu Dhabi weekend. Having endured a testing season where he's been consistently outperformed by teammate Fernando Alonso the Ferrari driver suggests we've all forgotten just how good he is.

"I know what I'm able to do. I know I can fight for the championship, for the victories, which I have many times," says the Brazilian. "You always hear from the media because they simply look at what's happened now, they never remember the past, they don't give anything about the future, they just remember what's happened race by race."

Having missed the latter half of the 2009 season due to injury, many believe Massa hasn't returned the same driver he once was. The Brazilian however, is quick to dispel such allegations, citing the new tyre compounds as the main culprit in his struggle to find pace, in much the same manner as reigning world champion Jenson Button.

"What's happened this year was a big, big change from last year's tyres. That was the worst thing for me, and I'm sure it will be another big change when we try the Pirelli's.

"The most difficult thing this year was to have the right temperature on the first lap in qualifying, not so much in the race."

A relatively anonymous season by his standards, Massa's main contribution to the championship was his involvement in the team orders saga at the German Grand Prix. When Massa allowed Alonso by into the lead it sparked a wave of controversy which resulted in a $100,000 fine for Ferrari, while Alonso, Massa and the team retained the points scored at the German event. Ironically the seven points Massa handed Alonso that July afternoon could well seal the Spaniard's third championship this weekend over a pair of chasing Red Bulls.