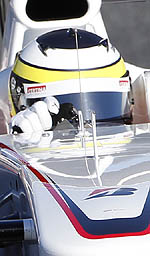 Pedro de la Rosa: "I had a good start and was able to overtake Jaime Alguersuari. From then on I just tried to push as hard as possible and keep contact with the guys in front. But actually I lost that contact to Rubens (Barrichello) and after that I had quite a tough race. We knew we would face a difficult weekend here, and I have struggled with the car since Saturday morning."

Kamui Kobayashi: "I'm very disappointed. I think I would have easily scored points here because my car was good in race conditions. But already on my first installation lap I realised there was something wrong with the car, and then I had problems with shifting. I went back to the garage and the pit crew tried everything to fix it. I then started from the pit lane. We gave it a try, but it didn't come as a surprise when I had to stop fairly soon because of the problem. It is a shame, but these things happen. I'm very much looking forward to going to Asia now."

James Key, Technical Director: "It was a disappointing race. We felt we might be in a position to score points, but unfortunately there was a problem on Kamui's car, which appears to be an ECU problem. We need to look into it further to understand it, but the problem caused damage to his gearbox on his out lap. We changed the ECU, but the gearbox was too badly damaged. We decided to start him from the pit lane, but immediately he felt the gearbox was a problem, so he had to stop, which was a shame. Pedro started on used option tyres, and we decided to bring him in early and change to a new set of primes, which looked good in practice, but the tyres didn't come in and unfortunately he lost places. It was a difficult weekend. We are now looking forward to the tracks which are coming up."

To check out our Italian GP gallery, click here