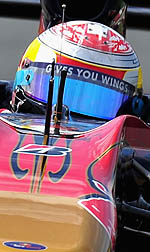 Sebastien Buemi: It was a positive performance, but a bit frustrating to miss out on the points. I lost some time around the pit stop, maybe we did it a bit early and I came out behind Barrichello. That was partly because the Lotus and Virgin I caught before the pit stop did not move over very quickly and I lost more time there. I was much faster than him from then on with the hard tyres, but it is very difficult to overtake and I could not find a way past. But all in all, I am pleased with the performance of the car over the weekend, which was a definite improvement over the last few races and I am looking forward to more developments and getting the F-duct working so that maybe we can have it on the car for Singapore. If we continue like this I hope to be able to fight fair and square with the Williams and Mercedes in the final races.

Jaime Alguersuari: I am pleased with my actual performance in terms of lap times and race pace and the fact I made no mistakes. However, at the moment, I really don't understand why I got the drive-through penalty. It's the second time in two races that I have got one of these! As far as I am concerned, although I did cut the chicane, I did not gain any advantage, catch the drivers ahead of me or pull away from those behind. The actual penalty did not make much difference to my race, but it was annoying all the same.

Franz Tost: We have made a step forward here and the performance was good from Friday onwards. Buemi got a fantastic start, moving up four places to tenth position. However, prior to the pit stop, he lost time behind Glock and then on his out lap, it took a while for him to get the new tyres working properly, which meant he lost a place to Barrichello. But he did a really good job throughout the weekend. Alguersuari, apart from getting a drive-through penalty for cutting the chicane, also produced good lap times. I feel quite confident and optimistic for the final few races, because both the team and the drivers have made progress, while the most important aspect is that updates we introduced on our car here seem to have delivered a better performance level.

To check out our Italian GP gallery, click here