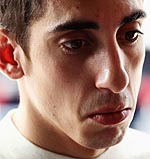 Sebastien Buemi has been handed a three-place grid penalty having been adjudged as having impeded Nico Rosberg during today's qualifying session.

The incident happened during Q2 when Buemi was running ahead of Rosberg and his Mercedes teammate Michael Schumacher. Both drivers - neither of whom made it through to Q3 - subsequently blamed traffic but didn't point the finger at any particular driver.

However, when they looked at the available evidence the Race Stewards - who include 1992 world champion Nigel Mansell - deemed Buemi as having breeched Article 31.7 of the 2010 FIA Formula One Sporting Regulations.

A separate incident involving Jarno Trulli and Lucas di Grassi was also investigated but the stewards opted to take no further action.