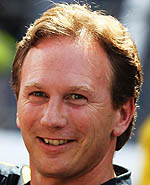 The Red Bull RB6 has been deemed fully legal after passing a revised test to its front wing and floor following today's free practice sessions.

Following claims by rival teams that the front wing on the championship leading car is flexing at high speed, the FIA has revised its testing procedure, basically increasing the load.

The FIA's technical delegate subsequently confirmed that Mark Webber's car had passed the test, as had Lewis Hamilton's McLaren. Both cars were "found to be in conformity with 2010 FIA Formula 1 technical regulations" said Bauer in his report.

Earlier, Red Bull boss Christian Horner insisted that the revised test held no fear for him or his team. "Our car has complied with the rules at every race so far and it will comply here," he told the BBC. "We take all the talk about our car as a compliment it shows the others don't know what we're up to."

Despite today's all-clear, there will be further, more rigorous tests in Monza when new floor tests and regulations are introduced.

In the eyes of some however, the constant criticism of Red Bull's car is seen as nothing more than sour grapes, Adrian Newey seemingly having produced yet another championship winning car.