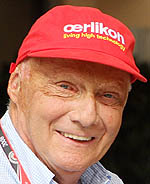 Three-time world champion Niki Lauda says he believes Ferrari will be hit hard next month when it appears before the World Motor Sport Council.

The Italian team is facing two charges following what appeared to be the manipulation of the race order in the German Grand Prix. Race leader Felipe Massa was passed by his teammate Fernando Alonso after being 'instructed' by his team to do so.

Fined $100,000 after the race, the Maranello outfit faces the charge that it breached Article 39.1 of the 2010 Sporting Regulations (Team orders which interfere with a race result are prohibited) and Article 151 c) of the International Sporting Code ("Any of the following offences … shall be deemed to be a breach of these rules ... any fraudulent conduct or any act prejudicial to the interests of any competition or to the interests of motor sport generally).

Team orders were banned in 2002 after Ferrari manipulated the result of the Austrian Grand Prix, ordering Rubens Barrichello to move aside for teammate Michael Schumacher in the final corner of the final lap of the race.

Niki Lauda, who won two of his titles with Ferrari, hopes the FIA throws the book at his former team.

"You have two models of how to race in Formula One as a team," he told the official Formula One website. "If you approach it politically then you are in the Ferrari mould. Or you try to give both your drivers equal opportunities and the fans an exciting sport, as Red Bull are doing in letting their drivers compete with each other.

"That is what makes this sport a crowd-puller," he continued, "because they see the best guys in the best cars racing each other with a 'may the best man win' philosophy - and not mocking the fans with a collusive result. What they (Ferrari) did in Hockenheim was against all rules. Either the rules are changed or everybody observes them.

"What they've done is wrong and they got an immediate punishment - and they will get a pasting from the World Council that is for sure."

To give the hearing a little added spice, it takes place just two days before the Italian Grand Prix weekend gets underway, meaning that should Ferrari face a heavy punishment the FIA can expect a warm welcome at Monza.

While Massa and Alonso are unlikely to be punished, it is widely thought that the Italian team will have its constructors' points for the German Grand Prix taken away.