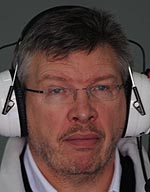 The development race has begun in earnest as leading teams look to create their own F-duct systems similar to that used by McLaren.

Having been deemed legal by Charlie Whiting, Red Bull and Brawn have both admitted they are in the process of developing their own version.

"Now it's been declared legal everyone's going to have to look at it, including ourselves," confessed Red Bull's Adrian Newey. "I think we know how it works - it's known technology that actually dates back to the early sixties and the Cold War."

Mercedes too are looking at their own system according to Ross Brawn, though he admitted that their system is still on the drawing boards. "It's obviously quite a powerful system and it's not easy to get it to work properly. McLaren have been working on it for 18 months, so it's not something you can do overnight."

McLaren's F-duct alters the air flow to the rear wing, stalling the air to reduce drag thereby increasing top speed. The McLaren drivers are believed to operate the system inside the cockpit by using their left knee.

Sauber has arrived in Melbourne with its own F-duct fitted to the cars for practice, though the Swiss team is unsure if it will use the untested system in the race.