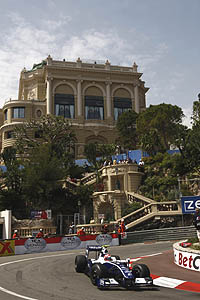 It is known the world over as the jewel in F1's crown and it has some of the most historic corners in racing. We are of course referring to the Monaco Grand Prix - a race which can even attract the interest of non-racing fans. The question of which is the most exciting corner is a matter of hot debate but when it comes to visibility on television there is little question about it. The view that everyone wants to see is of the hairpin and Pitpass' business editor Chris Sylt reveals that this now has a new name.

The hairpin was originally the site of Monaco's train station and so was initially named the 'station hairpin'. In 1973 the American hotel chain Loews opened a sprawling hotel on the site and created the famous tunnel which straddles the coastline. This led to the hairpin being named the 'Loews hairpin' which is how most race fans remember it. When the hotel changed hands it was renamed the Monte Carlo Grand and the hairpin began a series of name changes which became lost on the public. It was first renamed the 'Grand hairpin' and then, when the hotel changed hands yet again it took the title of 'Sun casino hairpin' after the neighbouring casino.

This year the hairpin's name has changed again and the new namesake hopes it will gain as much recognition as it did when Loews was on the site.

In 2004 the hotel was taken over by the Canadian hotel chain Fairmont and so from now on the hairpin will be known as the 'Fairmont hairpin'. The view from the TV cameras atop the hotel conveniently just manages to capture the hotel's sign making it most probably the most visible and valuable advertising space in F1. Remarkably it doesn't cost the hotel one dollar. Compared to the tens of millions which sponsors pay for trackside advertising it sure is a good deal.

The subject of this global publicity is one of the world's sleekest hotels. The Fairmont doesn't just straddle the coastline but actually extends over it which gives the hotel uninterrupted sweeping views of the Mediterranean.

Fairmont spent £38m on refurbishing the hotel's interior which had become almost a shrine to 1970s with a golden mirror-effect on the ceiling of the lobby and padded fabric wallpaper in the rooms. That has now all been ripped out and replaced with a minimalist mahogany and cream colour-scheme and touches such as circular mirrors on the room doors to mimic portholes. There's a panoramic terrace bar on the roof with a view of the mountains behind, downtown Monaco on one side and the sea on the other. It is similar to the view from the suite taken by film director George Lucas during the GP - one of its balconies hangs over the hairpin and the other over the sea.

Indeed so popular are these suites with the F1 fraternity that the Fairmont is planning to dedicate them to renowned drivers. It will be far from the only link that the hotel has with F1 since during the GP it hosts the billionaire club run by former F1 team boss Flavio Briatore. It is understood that Briatore has taken over DJ duties himself at the event in recent years whilst Monaco's very own Prince Albert partied away on the dance floor. It must be one of the one of the few sights which could distract guests from the views outside.