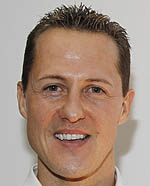 Having completed a race simulation programme and posted the sixth best time of the day, Michael Schumacher looked as fresh as he ever did yesterday evening. However, he's confused by the reaction from his fellow drivers following his return to the cockpit.

It's fair to say that the German's return to racing is one of the biggest (positive) stories to hit F1 in recent years. However, while one can understand the delight of the fans and Bernie Ecclestone, even Schumacher is surprised that his rivals are glad to have him back.

"I'm surprised about their reactions," he told reporters at Jerez, "everyone is very pleased for me to be back... but I know things will change on the race track."

While the German has gone head-to-head with Fernando Alonso before - the Spaniard now replacing the seven-time champion at Ferrari - several new stars have emerged since Schumacher retired at the end of 2006. And while fans wait to see how the German legend will react to the precocious talents of Hamilton and Vettel, there are clearly no after effects from the neck injury which (supposedly) kept him from returning last season.

"I feel fresh out of the box," he said, hinting that there may yet be more to come. "So far it's all about as many laps and kilometres as possible. It's not so much about fine-tuning yet."

The German is back in action on Saturday.