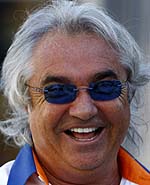 Some sources put Briatore's wealth at £110m but, nevertheless, a recent report in the London Evening Standard by Pitpass' business editor Chris Sylt, shows that the ban could still have a considerable affect on his fortunes. Just one of his F1 ventures netted Briatore an eye-watering £22m over the past few years and paid him £6.5m in the year before being banned. No wonder he has taken on the FIA all guns a blazing.

The cash haul is revealed in the accounts to 31 December 2008 of Briatore's Kent-based company Stacourt, and its money came from the Spanish broadcast rights to F1. In 2008 Stacourt paid a £670,000 dividend and a £5.8m consultancy fee to Formula FB Business, Briatore's Virgin Islands management company, an increase of £600,000 on his take the previous year. Stacourt is ultimately controlled by Briatore's FB Trust and 2008 was a bumper year for it.

Interest in F1 in Spain accelerated in 2008 as the country hosted two races for the first time in over a decade. This boosted Stacourt's revenues by 20% to £14.5m and there was a similar increase in its costs. This cut the company's after-tax profits by almost half to £387,000 but it didn't hit Briatore's pocket. The fee to Formula FB Business makes up the bulk of the company's costs along with a payment to Formula One Management (FOM), which sold Stacourt the Spanish broadcast rights.

Spanish station Antena 3 reportedly screened F1 for free in 2003 whilst another national station TVE is thought to have only shown the sport after Renault provided £1.5m in exchange for advertising slots. It more than paid off.

In the year-ending 31 December 2003 Stacourt had a turnover of £3m. Its total costs came to £2.4m which included a fee to FOM as well as £700,000 of consultancy fees which the accounts state were paid to Formula FB Business. Stacourt made a healthy retained profit of £375,000 but this was small fry compared to what was to come.

'Alonsomania' seized Spain following the driver's first victory and Telecinco, one of Spain's leading private TV companies, signed a contract to broadcast F1 for 2004 and 2005 at an estimated price of £3.5m per year. It soon filtered to Stacourt's bottom line.

During the year-ending 31 December 2004, Stacourt was able to pay an interim dividend of £300,100 on top of consultancy fees to Formula FB Business which more than doubled to £1.5m. Stacourt's turnover increased over 50% to £4.6m and its total costs nearly increased by the same amount leaving a retained profit of £439,000.

Stacourt has so far paid more than £22m to Briatore in the form of interim dividends and consultancy fees. It still has a cash pile of £472,000 in the bank and, after deducting liabilities, shareholders' funds came to £400,000 at the end of 2008.